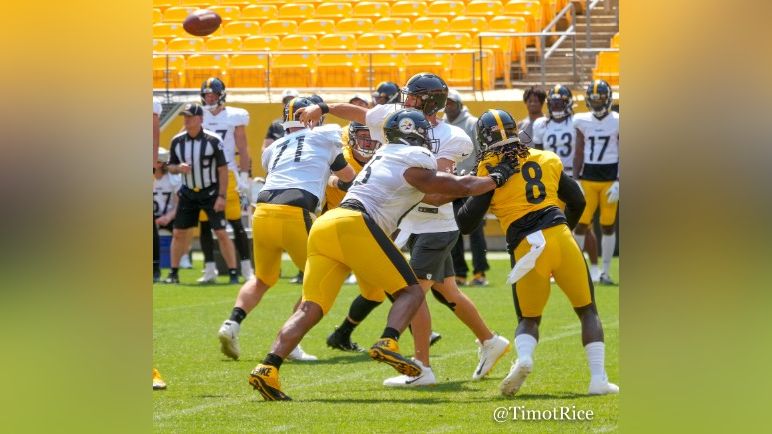 The Pittsburgh Steelers’ efforts to overhaul their run game this offseason has involved a lot of moving parts. Arguably the most notable has been the installation of a new offensive line coach, Adrian Klemm, who brings with him a distinctly different mindset to the position than his predecessors—one of aggressiveness and physicality in all aspects.

It’s one that the rookies are both learning and embracing at the same time, something fourth-round tackle Dan Moore Jr. discussed with reporters after practice on Wednesday. It’s “Just being physical”, he said. “The way we talk, our terminology, our drills. Just the way we try to go about our basis on a daily basis, everything is synthesized to be physical”.

That’s not the first time it’s been noted by one of his players that even the terminology, the verbiage that they use, comes from a place of aggression and physicality, in order to help instill that mindset—which Moore concedes may be a contributing factor to some of the scrums we’ve seen in camp, of which he’s been a part of a few.

The fourth-round pick out of Texas A&M has been logging a lot of snaps in training camp so far, with projected starting left tackle Chukwuma Okorafor having been sidelined with some undisclosed injury since camp opened. He should start tonight’s game against the Dallas Cowboys, where they’ll put on display the “different system” the offensive line is running this year.

“In the run game specifically, where we’re trying to be more physical, we’re running at defenders, not around defenders”, Moore told reporters following Wednesday’s final open practice before tonight’s game. “That’s a little bit different from what I’ve been doing in the past. And in the pass game, we have a little bit of mixture of sets, but it’s all coming together”.

Moore won’t be the only rookie in the starting lineup, even along the offensive line. Kendrick Green, the team’s third-round pick, will be there at center. Both of them were drafted not just for their talent, but also for their fit into the Steelers’ new physical approach along the front.

It’s probably a more natural fit for Moore than it is for Okorafor, but there’s still a lot of football left to play before he can hope to lay claim to the starting left tackle job. Okorafor does have 18 games of NFL experience, which is the second-most of any of this year’s projected starters behind only former Pro Bowler Trai Turner.