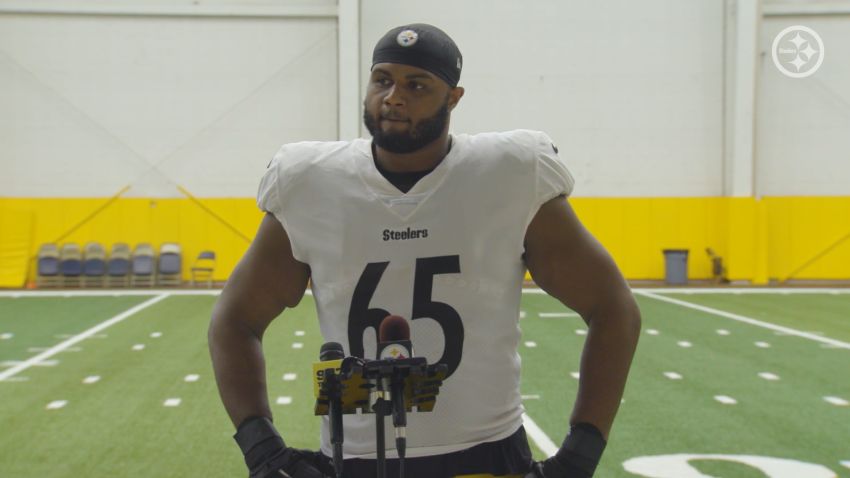 Rookie tackle Dan Moore Jr., for the second day and a row now, has worked with the first-team offensive line at left tackle for the Pittsburgh Steelers. He spoke to the media after practice today, but according to Chris Adamski of the Pittsburgh Tribune-Review, not before receiving a few minutes’ worth of words from head coach Mike Tomlin.

But he might be. And he might have to be. Because we don’t know what’s going on with Zach Banner, the fifth-year veteran who was projected to be the starting right tackle this year, but is continuing to recover from a torn ACL. He only briefly played (12 snaps) during the preseason, and has not practiced this week.

Chukwuma Okorafor was flipped from left tackle to right these past two days, with Moore on the left, and that’s perhaps to accommodate the rookie, who not only is more comfortable on the left but clearly played better there. Okorafor has college experience on both sides, but all of his 18 NFL starts have come at right tackle, including 16 in 2020.

Moore is a fourth-round rookie out of Texas A&M, a veteran of quality SEC edge defenders. He has grown significantly from the start of the process, when we heard reports from OTAs that he was getting whooped by Cassius Marsh. But he’s stepped it up once the pads came on in training camp.

First-year offensive line coach Adrian Klemm said back in May right after Moore was drafted that he believed the rookie would be capable of competing right away, and realistically, he should be. Banner has one start under his belt. Okorafor has never been an intended starter. But if he does start, it’s going to be on the left side.

“My goal was to just help this team in any way that I can”, Moore said. “If coach feels that [I can start], then that’s what the call will be”. He added, “I’m ready for whatever comes at me. I’ve been preparing every day, so, like I said, I’m ready”.

The 2021 season will mark the first team anybody has started a game at left tackle for the Steelers other than Alejandro Villanueva in more than half a decade. The two-time Pro Bowler was not re-signed this offseason, and is now starting for the Baltimore Ravens.