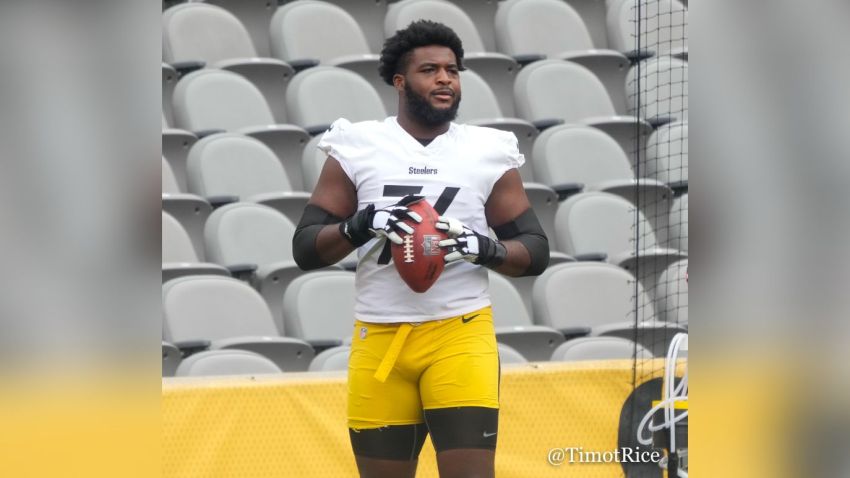 The Pittsburgh Steelers have two principle tasks to accomplish on the offensive side of the ball above all others, and they happen to be interrelated. One is revitalizing the running game and turning it into something that can be seen as competent. The other is establishing a new offensive line, not just with new faces, but a new attitude.

Projected starting left tackle Chukwuma Okorafor is central to both endeavors, and he understands that there is ground for him to make up. “Looking at my film last year, the pass game was decent, but the run game was poor, so that’s for sure the main thing, I’ve got to figure out how to run the ball this year”, he told reporters on Sunday.

Drafted out of Western Michigan in the third round in 2018, Okorafor was a young and inexperienced lineman whom the Steelers valued as a talented athlete with the attributes of a potential future starting left tackle. They’re closer than ever to finding out whether or not they’re right after installing him in the spot occupied by Alejandro Villanueva for the past six years.

But he is absolutely right when he assesses his game tape, in the disparity between his play in pass protection and as a run blocker. While he is certainly capable, when he has both his body and mind working in cohesion, to deliver a solid run block, it has never been a strength of his.

But it’s something the Steelers are prioritizing this year after finishing the 2020 season with the 32nd-ranked running game. That process involves the promotion of Adrian Klemm to head offensive line coach, who is importing his own philosophy to the table, which differs from his predecessors and is built around a more aggressive and physical approach to playing the position.

Okorafor, though, is just one piece of the puzzle. With Matt Feiler, Maurkice Pouncey, and David DeCastro also joining Villanueva as offseason departures, continuity is going to be an impossibility. Zach Banner could potentially be a strong run-blocking presence at right tackle, but we still have almost as much to learn about him as we do Kevin Dotson, let alone Kendrick Green.

While he does have 18 starts in his career, including 16 last season, none of them are as an intended starter, and they’ve all come at right tackle. Perhaps with the move to the left side and a full offseason actually working with and training as the first-string left tackle, a position in which he’s more comfortable, he will finally show that he is the player the Steelers thought they were drafting three years ago.