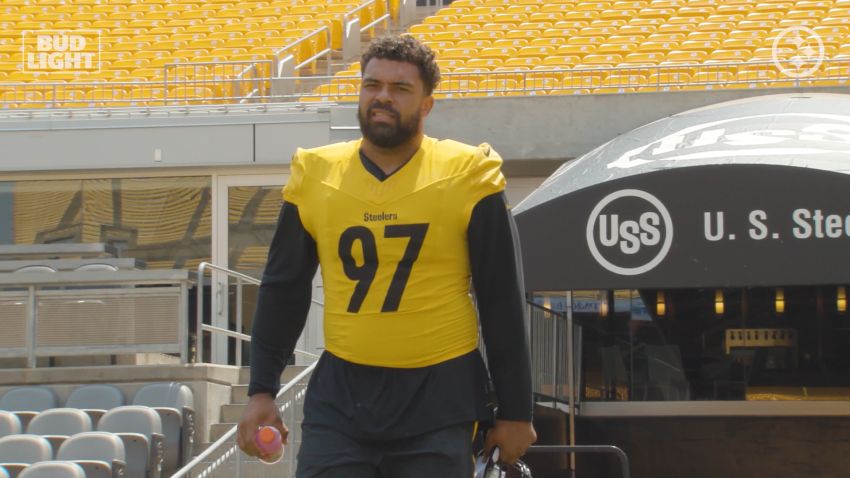 Sometimes when he’s out in front of me on my screen, either in a game or in front of a podium, I like to just take a moment and appreciate the fact that Cameron Heyward is exactly the person that the Pittsburgh Steelers thought they were drafting him when they selected him in the first round in 2011.

Now going into his 11th season in 2021, aged 32 years old, he is coming off of a run of four consecutive Pro Bowls, and three consecutive trips the All-Pro list. He’s still widely regarded, even by outlets like Pro Football Focus, among the top players at his position.

Yet he can’t get his young teammates to stop treating him like an old-timer. It doesn’t help that, outside of Tyson Alualu, the defensive line room is willed with a bunch of young guys—even Stephon Tuitt is 28, in comparison, and Chris Wormley is 27—but he, at least playfully, isn’t appreciating having an age that he doesn’t feel thrown in his face.

Asked why his teammates keep treating him like an old man, he responded incredulously, “I don’t freaking know. man, they’re ready to ship me out to pasture right now. They treat me like Old Yeller out here”.

Heyward only recorded four sacks last season after registering at least eight in each of the previous three years, but he still racked up 19 hits. He had 54 tackles with seven for loss, and he even managed his first interception. Pro Football Reference credits him with more quarterback hits in 2020 than in either of the previous two seasons, when they began tracking those numbers.

“Hopefully I got another 10 more years for you”, Heyward said, before being asked if he feels his age. “Wow. Wow. Wow”, he responded. “Oh my gosh. You guys act like I should be doing Jazzercise or something, man. Like, I’m okay. I feel good. Like, I should be doing step aerobics with Richard Simmons. I’m good. Let me be. I’m cool, I’m feeling great. Talk to me in November, December, we’ll see where we’re at”.

The Steelers obviously aren’t seeing his age. Ahead of the start of the 2020 season, in September, they signed him to a new four-year contract extension through the 2024 season, at which point he will be 35 years old. He is cuttable as of 2023, admittedly, with the way the contract is structured (high base salaries in the final two years of the deal), but it shows that they believe he’s not nearing the end.

That doesn’t mean that they aren’t preparing themselves. They did bring back Chris Wormley, and drafted Isaiahh Loudermilk as a young player whom they can groom over the course of the next couple of years. But Heyward will keep anyone who’s on deck waiting as long as possible.