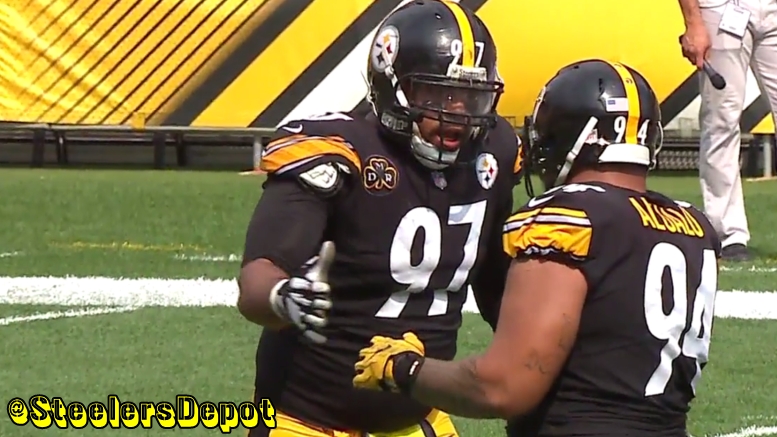 Cam Heyward isn’t just a great player. He’s a great leader. In the hope that what he passes down to the guys behind him will turn them into the next Heyward. Or something at least pretty close. Speaking to reporters Monday, Tyson Alualu described Heyward’s leadership presence in the Steelers’ locker room.

“He’s a guy that will be a leader to tell you what you need to do,” he told reporters Monday via the team. “And at the same time he leads by example and shows guys what it takes to be an elite player. His leading by example is probably the best attribute because he’s always out here trying to get better. Every aspect of his game.”

Heyward is the clear leader in the defensive line room, one teeming with young talent. Whether that’s a third-year player like Isaiah Buggs, a second-year guy like Carlos Davis, or a rookie like Isaiahh Loudermilk. All guys who have small roles right now but ones that could grow in the next 1-2 years. Heyward is also one of the teams leaders too, the one who talks to the media when things are good and when things are bad along with being one of the faces of the franchise.

Heyward’s been down the road as the mentor. He sat and learned behind the likes of Aaron Smith, Brett Keisel, and Casey Hampton to begin his career. Heyward didn’t start a single game until his third year in the league and he didn’t start all 16 until his fourth. He more than anyone understands the value of being mentored.

Though he’s gotten the reputation for being the old man shaking his fist at the cloud, Alualu said that isn’t entirely true.

“Cam is still that the biggest kid on the playground. Always playful but when it’s time to turn things on, he flips that switch and becomes the player that he’s always been here for the Steelers.”

That player is one of the best defensive lineman in franchise history, no small praise considering the guys who have walked through that door. But besides Joe Greene, Heyward could stand beside any of them, and even has an outside chance of joining Greene in Canton one day, though those odds are unfortunately slim.