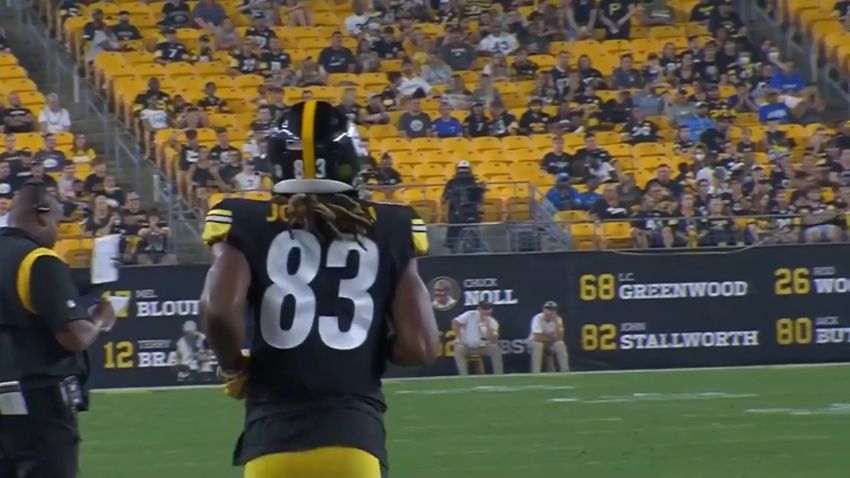 Topic Statement: The Steelers will find a way to keep six wide receivers.

Explanation: While five wide receivers is a given, a sixth wide receiver has to be a special teams contributor and be willing to do grunt work, the way that Darrius Heyward-Bey and Johnny Holton did. There are some such candidates on this year’s roster.

JuJu Smith-Schuster, Diontae Johnson, Chase Claypool, James Washington. Those are the givens, and Ray-Ray McCloud is very close to being a lock, too, especially after making a few plays in the last preseason game just to serve as a reminder of what he can do.

But we should also expect to see one of last year’s practice squad wide receivers—Cody White or Anthony Johnson—to ‘graduate’ to the 53-man roster this year. Both are bigger-bodied guys who play on special teams and are willing to throw their weight around as blockers. If that sounds familiar, it should, because that was Darrius Heyward-Bey…give or take a couple tenths on your 40 time.

The Steelers found time to get Heyward-Bey and Johnny Holton onto the field in certain packages in the past. I’m sure they can find a use here and there for a guy like Cody White, whom they allowed time to heal during this training camp rather than just waiving him with an injury, a big sign of how much they actually like him.

There is a fundamental problem with the idea of the Steelers carrying six wide receivers this year: they have too much quality depth. You could argue that they have an abundance of rosterable players at most positions: quarterback (Joshua Dobbs); tight end (Kevin Rader); running back (Jaylen Samuels); offensive line (B.J. Finney); defensive line (Isaiah Buggs); outside linebacker (Jamir Jones); inside linebacker (Ulysees Gilbert III). Maybe only the secondary is the exception here.

They have to find extra roster spots at a lot of positions. Inevitably some will get shortchanged, and in an offense with receiving threats at tight end and running back, it stands to reason that wide receiver will be the odd position out.