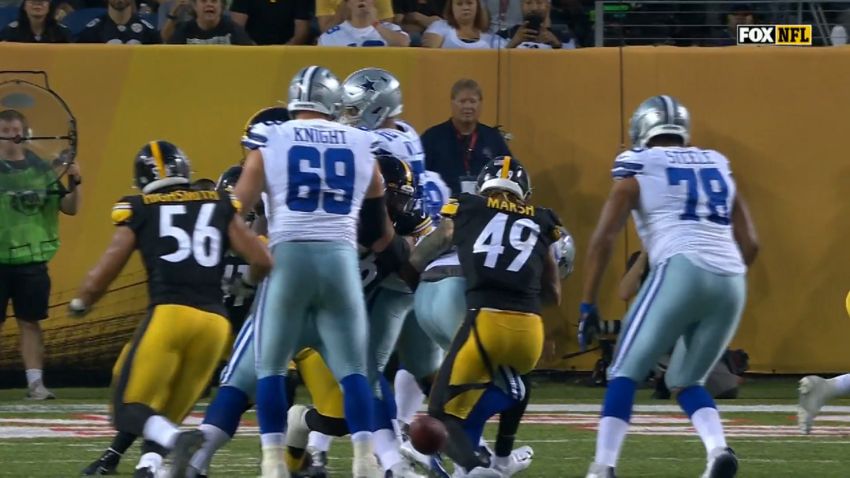 Explanation: At the risk of posting this after the cuts come out, today we’re going to discuss the outside linebacker position, the numbers, and who makes the cut. Behind the top trio, Cassius Marsh is the only veteran of the group, with Quincy Roche a rookie sixth-round pick and Jamir Jones a first-year college free agent with not even preseason experience prior to this year.

The most important quality of any player near the bottom of the dept chart is what he does on special teams, and Cassius Marsh is a proven special teams player, in real games that matter. Jamir Jones played a lot of special teams snaps this preseason, and even racked up some tackles, but no resume is more valuable than doing the same thing in the regular season and postseason.

And Jones has consistently been ahead of Quincy Roche over the course of the offseason, both in the pecking order and in the actual in-game performances, so even if the Steelers keep five outside linebackers, Marsh is ahead.

As you can see on my final 53-man roster, the Steelers don’t have the room for a 10th linebacker with needs dictating roster spots elsewhere. Even if they don’t keep a seventh defensive lineman, with Carlos Davis as a special teamer (he’ll be on the team regardless, but his work in the third phase opens them up to carrying an extra), the additional spot would almost surely go to the secondary, even an outside addition.

And Jamir Jones is the guy who has clearly been the third-best outside linebacker on the field throughout the entire offseason process behind Alex Highsmith and Melvin Ingram. It hasn’t really been close. Especially late, Marsh didn’t really finish strong.

Plus, Marsh is a veteran who isn’t likely to have any offers. He won’t have to clear waivers and can be easily kept on the practice squad. That’s where they got him last year.