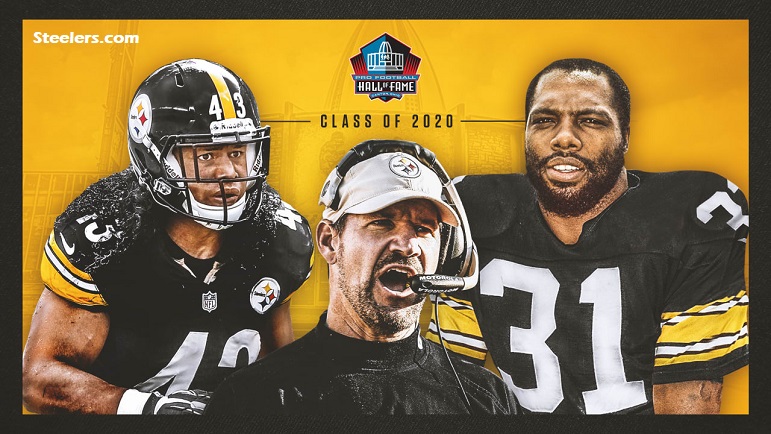 While the Pittsburgh Steelers won their game on Thursday night, it would be fair to say that they dominated the weekend. Marking both the 2020 and 2021 classes, the Pro Football Hall of Fame welcomed five more members of the black and gold into their membership over the break.

Arguably the headliner, if there was one, was Troy Polamalu, the great safety who played for the Steelers from 2003 through 2014, as perhaps the face of the class of 2020. Guard Alan Faneca joined him in the class of 2021, while head coach Bill Cowher, front office executive and scout Bill Nunn, and safety Donnie Shell were also enshrined as members of the Centennial class, voted in last year.

“What a weekend for the Pittsburgh Steelers”, Cowher said at the top of his induction speech. “It is unbelievable to me to go into the Hall of Fame on the same weekend with two guys you drafted—Troy Polamalu and Alan Faneca. Also, Donnie Shell, and the late, great, Bill Nunn. But the Pittsburgh Steelers on this stage, the gold jackets on this stage, you guys set the standard, and created the culture, and it’s our job to keep it going”.

The Steelers now boast 29 members of their organization among the members of the Pro Football Hall of Fame, from Bert Bell and Jack Butler to Joe Green and Mel Blount, down to Rod Woodson, Dermontti Dawson, Kevin Greene, and the latest modern candidates in Polamalu and Faneca.

Cowher did give a special mention to Greene, who helped define the Blitzburgh era in his short stint with the team. Greene passed away late last year at the age of 58, but Cowher said that is spirit was in Canton. “He was a special man who I had the privilege of coaching. He embraced life, and his passion was exuded in everything that he did”.

The Steelers are among the most decorated organizations in the history of the NFL, boasting the most members of the Pro Football Hall of Fame of any team short of the Green Bay Packers and the Chicago Bears.

The question is, who’s next? Of those who are already eligible, perhaps the only remaining realistic candidates are wide receiver Hines Ward, whose enshrinement was advocated for frequently over the weekend, as well as L.C. Greenwood, the star defensive end of the Steel Curtain.

Center Maurkice Pouncey, who just recently retired, figures to have a chance after making the Pro Bowl nine times in 11 years, with six All-Pros. The only legitimate lock at this time is quarterback Ben Roethlisberger, five years after he retires, but wide receiver Antonio Brown is well within that conversation, and T.J. Watt is off to a good start, despite having a long way to go.