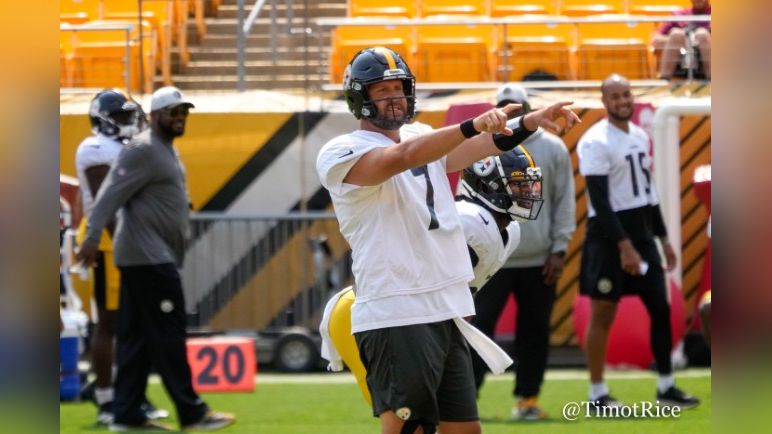 When veteran Pittsburgh Steelers quarterback Ben Roethlisberger trots onto the field Saturday night against the Detroit Lions at Heinz Field for his first preseason action of the year, he’ll be (presumably) taking his first reps behind the projected starting offensive line.

That projected starting offensive line, which consists of Chukwuma Okorafor, Kevin Dotson, Kendrick Green, Trai Turner and Zach Banner, has yet to truly take reps together throughout the summer due to injuries, players being excused from practices and others sitting out to slowly work back in after coming back from injuries.

Though that may sound concerning to most, Roethlisberger told Steelers reporters Thursday that he’s excited to get some work in behind the new starting offensive line, and is looking forward to seeing how the new-look group proceeds forward in 2021.

“Yeah. I mean I’m excited for them,” Roethlisberger said Thursday. “I think there’s a lot of continuity that they need to develop together. You know, it’s not so much, how do I feel about them to be successful; they need to feel comfortable with each other. And so it’ll be good for them to get on the field together, to work together and, and just kind of see how this group is gonna proceed forward.”

While it still remains rather difficult to take much of anything away from preseason games when projecting into the regular season, all eyes will be on the Steelers’ starting offensive line, should all five projected starters line up together. Though the Lions don’t truly have any feared pass rushers at the moment, it will be interesting to see how the starting five holds up in pass protection, as well as how they get a push up front in the run game, assuming the starters play more than a series on Saturday night at Heinz Field.

This group is easily the Steelers’ biggest perceived weakness ahead of the 2021 season. A strong showing Saturday night would go a long way towards alleviating some concerns for the media and the fans alike.