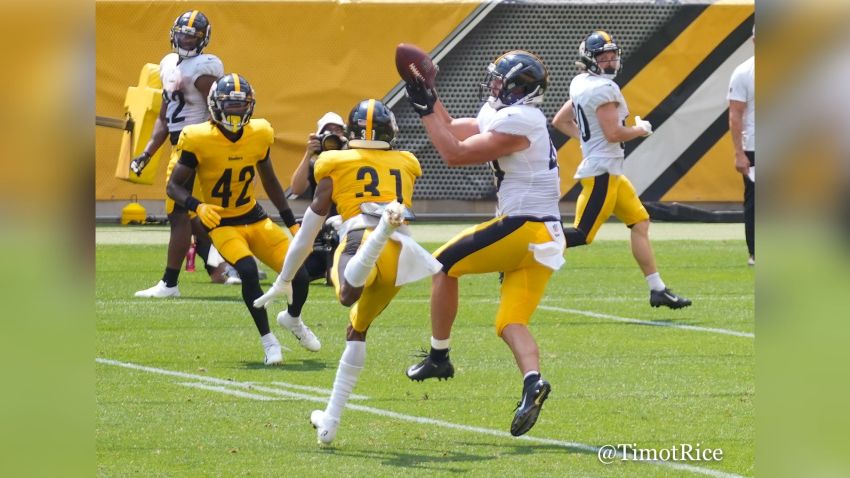 After the surprising move that came Tuesday afternoon with the Pittsburgh Steelers waiving injured DB Antoine Brooks Jr, the competition for the nickel cornerback job has appeared to have fizzled out. Brooks hadn’t participated in training camp practice or the last two preseason games after getting injured in the Hall of Fame Game against the Dallas Cowboys.  His competition for the job, FA signee Arthur Maulet, is currently listed as day-to-day with an ankle injury according to HC Mike Tomlin. Tomlin mentioned that he hopes to see Maulet return to play in the team’s final preseason game Friday against the Carolina Panthers, but it remains to be seen how significant the injury actually is and how fast Maulet can return to play.

Tomlin also mentioned when asked about CB Cam Sutton and his potential role on defense that they are more than comfortable with him playing both inside and outside depending on the defensive package. As of now, it looks like Joe Haden and Cam Sutton will be the teams’ starting outside corners in their base defense but will have Sutton kick inside to the nickel with James Pierre coming out to play the outside corner spot opposite in Haden when Pittsburgh chooses to go with their nickel or dime packages.

Tomlin mentioned that this versatility would be difficult for some defenders, but he has confidence in Sutton’s ability to have the mental makeup to handle it, giving they saw that in his play back when they scouted him coming out of the university of Tennessee in lead up to the 2017 NFL Draft.

While I do agree that having Sutton kick inside to the nickel position and have Pierre play the boundary is currently Pittsburgh’s best option as they sit here today, I don’t know if this would be the most optional decision for their defense as a whole. Sure, I do agree that Sutton has the mental acumen to execute as both a boundary and slot cornerback, but the long history of “miscommunication” by the Pittsburgh Steelers defense, more specifically its secondary, sends up red flags when talking about constantly moving pieces on the backend of the defense.

Coverage responsibilities and roles are already difficult to get down at one position, let alone having to have all the members on the same page when the defense has guys interchanging positions regularly at the speed of the NFL game.

On top of that, the CBs have had an up-and-down showing thus far in the preseason with Cam Sutton struggling particularly on the outside in the second preseason game against the Eagles when asked to handle deep speed. There were plenty of times the receiver got the better of him at the top of the route, getting easy separation for the easy completion. Sutton did hold up better when asked to play in the slot against the Lions but having to rely on him as your clear CB #2 this season could come with its peaks and valleys.

James Pierre by all accounts has had a great camp thus far, having a natural nose for the football and has been making plays in practice taking the football away. However, in the first few preseason games, we have seen Pierre deal with his ups-and-downs in coverage as well, specifically allowing inside leverage to receivers breaking on their routes, being just a tad slow to click-and-close on the ball. Pierre has had a few key pass break ups and has shown that physicality to play the ball as he contests the pass, but he can get a little too aggressive at times, either arriving early or getting faked out by savvy route runners on double moves.

Justin Layne came into training camp under a microscope, having failed to produce in his first two seasons and live up to the third-round draft capital the Steelers invested in him back in 2019. While he has had his lumps in practice and still struggles with consistency as a tackler, he has stepped up in the form of splash plays, getting his hands on the football in the form of interceptions and forced fumbles in the teams’ first three preseason games. The coaches have noticed just as much, and it would be reasonable after the release of Brooks that Layne is more on the inside looking out than vice versa.

I think it would be fair to say that while the defense as a whole has taken strides since the start of camp by adding Melvin Ingram and Joe Schobert to the front seven, the secondary still remains a concern. Pittsburgh had four capable corners in solidified roles last year, but the losses of Steven Nelson and Mike Hilton have left a cloud of uncertainty in terms of how the cornerback spot will work itself out. Now I could be worrying too much, and both Sutton and Pierre take the big leaps forward we are hoping for to lock down the nickel package with another DB/ LB playing the dime role but should one or both of those guys fail to take that step forward in 2021, the play on the backend of the defense will noticeably decline compared to last season.

What are your thoughts on the current state of Pittsburgh’s CB room? Do you think they have the guys needed to play at a high level in-house, or would you like to see them add either a boundary corner or nickel corner before the start of the season? Should they look to the current free agent market, target a player that gets cut at the end of the preseason, or target a higher-caliber option via trade? Please leave your thoughts in the comments section below and thanks again for reading!