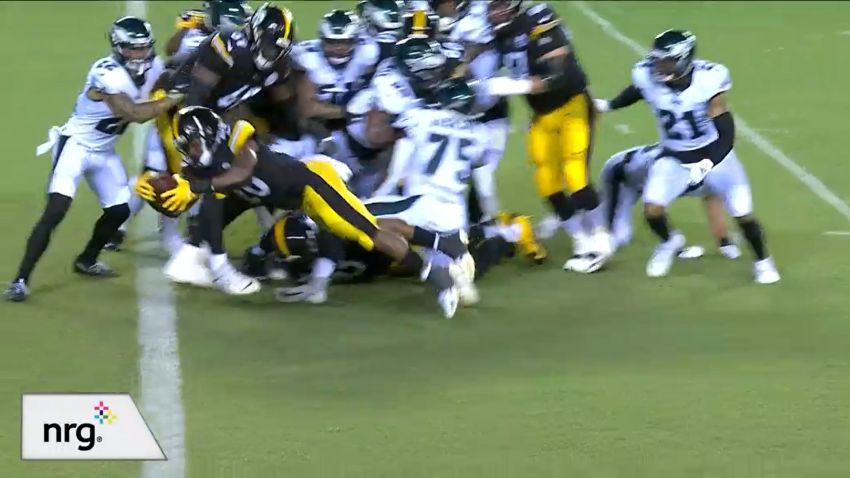 Even though there was plenty of ‘down’ time last offseason for players, then-rookie running back Anthony McFarland didn’t have time to catch his breath. The Pittsburgh Steelers’ 2020 fourth-round pick was constantly putting his feet before his mind when he got the opportunity to get on the field last season, but entering year two, he’s grown because of it.

Following a positive preseason performance last night against the Philadelphia Eagles, during which he rushed for 34 yards on nine carries, including a nifty second-effort one-yard touchdown, he spoke to the media, albeit briefly, about his processing slowing down.

“Obviously, practice is always gonna be different than a game, but in a game, as I get the ball more and more, I just learn how to be comfortable”, he said. “Just being patient, not being so jittery; taking it one play at a time”.

When it comes to McFarland, it’s worth remembering that he wasn’t just an underclassman, he was in fact a redshirt sophomore who only played two years of college ball, one of which was hampered for most of the year by an injury. Then he came into the NFL during a pandemic, which robbed him of an opportunity to get preseason carries.

Speaking to reporters as training camp opened, he seemed well aware of his previous faults. “Last year, the only thing I learned is every play is not going to be a big play”, he said. “I feel like every time I got the ball last year, I always thought to myself, ‘[opportunities] are going to be very limited,’ so when I got the ball, I tried to do too much with it”.

I imagine that was evident to most who watched him play. There were certainly snaps where he stopped himself from making a positive play because he was in a rush to may a play—again, his feet working faster than his brain, which was telling him nothing but ‘you need to show them something’.

The Steelers are figuring out a role for McFarland, who adds a speed dimension to the backfield that they otherwise lack. It helps that Matt Canada, their first-year offensive coordinator, was his college coach in 2018, the year that he really excelled.

We haven’t seen it during the preseason games, but reports from training camp indicate a more creative role for him, including being on the field at the same time as another running back. The better he does, the more snaps he will earn—as long as he can remember that it does no good when you try to force a play.