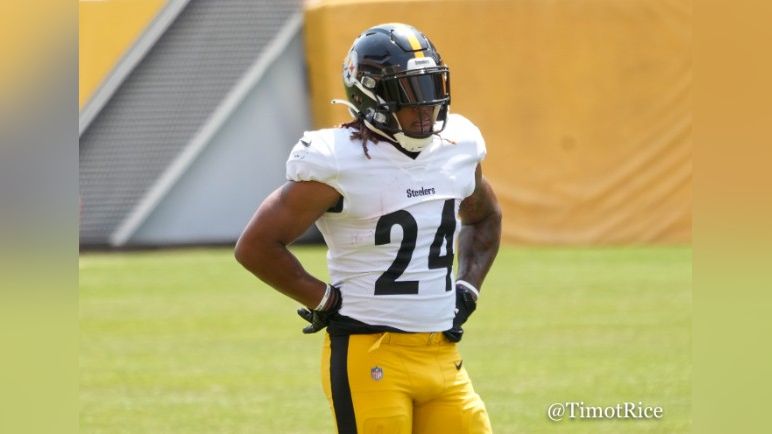 The Pittsburgh Steeler look to enter their fourth and final preseason game against the Carolina Panthers tonight to wrap up the preseason in preparation for the regular season. There have been several prominent training camp battles over the course of training camp, but one position that many Steelers fans will have their eyes on tonight is the battle at the running back position.

Coming into 2021, it was widely expected that rookie first-round pick Najee Harris would operate as the team’s workhorse running back that HC Mike Tomlin has been known for over the course of his tenure in Pittsburgh. Harris has lived up to the bill thus far, showcasing a professional demeanor and relentless work ethic that is coupled by his talents as a runner and receiver out of the backfield.

However, the room behind Harris was something that had a lot less certainty when training camp began. The team returned fourth-year veteran Jaylen Samuels third-year veteran Benny Snell Jr., and second-year pro Anthony McFarland Jr. Along with these names, the team retained core special teamer Trey Edmunds and brought in free agent Kalen Ballage during the offseason.

The big reason why Pittsburgh felt inclined to invest a first-round pick in Najee Harris this offseason can be related back to the travesty that was the Pittsburgh running game last season. The team ranked 28th in rushing attempts and dead last in the league in rushing yards and yards-per-carry in 2020, completely abandoning the running game to end the year and relying more on the quick passing game near the line of scrimmage to move the ball. Obviously, we all got to see how that turned out as the team fell apart down the stretch and got bounced from the 2020 NFL Playoffs in the Wildcard Round against Cleveland after starting 11-0.

Entering into 2021, the team has made a commitment to improving the ground game. They have completely revamped their offensive line from last season seeing prominent names like Maurkice Pouncey retire while releasing David DeCastro and letting Alejandro Villanueva and Matt Feiler walk in free agency. They brought in several free agents and drafted some young options to remake the OL room and promoted Adrian Klemm to OL Coach who has preached physicality and nastiness to his players since getting the job.

Combine that with the change in offensive philosophy under new OC Matt Canada, and you can notice a change in demeanor upfront so far this preseason, as the new unit still has a ways to go, but the message has been received well for a need to be better upfront in 2021.

That brings us to the running back room behind Najee Harris. Coming into camp, it was projected that Benny Snell Jr. would be the favorite to be the early down backup to Harris with McFarland mixing in as a change-of-pace/scat back in Canada’s new offense. However, Snell has been on the shelf for virtually all of training camp with a leg injury, allowing McFarland and Kalen Ballage to get more run in preseason action. Ballage especially has looked good since being signed to the team, using his size to his advantage as a short-yardage specialist while also proving to be a reliable pass catcher out of the backfield.

Ballage has also showcased better vision as a runner in limited action and has been a viable contributor on special teams, making his case to the coaching staff that he can be great depth behind Harris as a runner but also contribute for ST Coordinator Danny Smith as well.

McFarland has been up-and-down in terms of using his speed to get the corner and provide the juice on offense that the other backs don’t have, but his inconsistencies in vision and making defenders miss in space have you wanting more out of the promising second-year back. Samuels has had some moments, particularly in the second preseason game against the Eagles where the second-team offensive line took it to the Eagles defensive front in the second half. However, Samuels hasn’t been spectacular, getting what is blocked for him and being more of a steady plodder, giving off the feeling that this may be the year the team moves on from him with guys like Ballage and McFarland playing better and providing more to the offense.

HC Mike Tomlin said in practice that he expects Benny Snell Jr. to play in the preseason finale tonight and that he should get the start. Thoughts on Snell are mixed depending on who you talk to as some sources say that Snell may be on the outside looking in and will have to have a good performance Friday in order to save his roster spot. Others have stated that that Snell not only has a roster spot secure due to how he is looked at by the coaching staff and organization, but that he also has a stranglehold on the #2 spot behind Harris on the depth chart despite the play of Ballage and McFarland.

Nothing is set in stone, however, and with roster cuts coming next week and position battles being won and lost tonight, I have a feeling this game against the Panthers will be the deciding factor how the rest of the room is sorted out behind Harris.

What are your thoughts on the running back room heading into the preseason finale against the Panthers? Do you think Benny Snell’s roster spot is in jeopardy? Does Snell have enough support from the coaching staff that he will keep his spot over Ballage despite missing time? How many running backs does the team keep and who do you expect them to be? Please leave your thoughts in the comments section below and thanks again for reading!