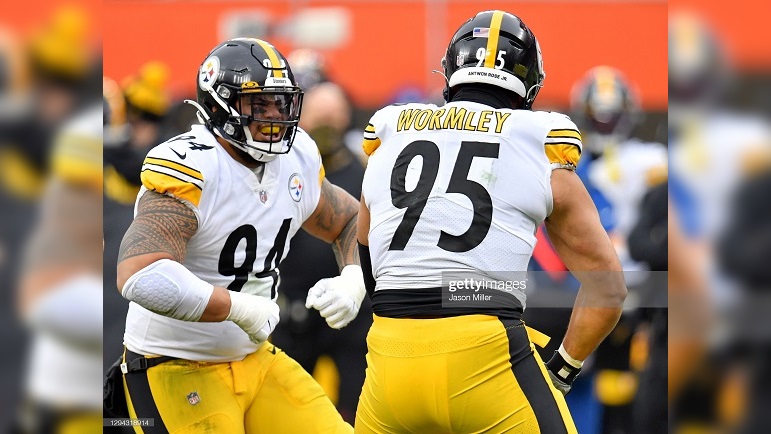 Will the Pittsburgh Steelers have defensive end Stephon Tuitt back for the team’s Week 1 game against the Buffalo Bills? It certainly is hard to give a definitive answer to that question with less than two weeks remaining, but we do know that Tuitt still has not resumed practicing as of Monday.

While Tuitt has yet to resume practicing, defssiveo tackle Tyson Alualu said after Monday’s practice that he’s still holding out hope that team’s starting defensive end will be ready to play against the Buffalo Bills.

“I feel like Tuitt will be ready come week one,” Alualu said on Monday.

If Tuitt is not ready to play in Week 1, however, Alualu made it clear on Monday that he will likely still remain at nose tackle in the team’s base defense and thus not move outside to play defensive end.

“But if he’s [Tuitt] not [ready], there’s a lot of capable guys that’ll step right in and keep that job rolling,” Alualu said. “”No, no, no. I mean, I still need to be the nose tackle where I’m at right now. I mean, I took the most reps there, but if I had to, no doubt, I’ve played that [DE position] in the previous years and would still feel comfortable out there. But, if that’s the case, I think the most reps would be in the nickel defense.”

In short, if Tuitt is not ready for Week 1, look for defensive end Chris Wormley to be the player to fill those shoes at the defensive end spot opposite veteran Cameron Heyward. Alualu, by the way, had a lot of praise for Wormley and the development he’s made as a player since arriving in Pittsburgh via a trade well before the start of the 2020 season.

“I think ever since he’s been here, I think his attributes I think fit the prototypical like 3-4 end,” Alualu said of Wormley. “And it definitely helps having Cam [Heyward] and [Stephon] Tuitt to learn behind and see how they play blocks, see how do in the classroom. I think it’s only helped elevate his game and I think that’s where he’s at now – learning the defense – and he’s definitely taking that next step to be that player that we need on the field.”

Alualu also said on Monday that Tuitt has been present at the team facility even though he’s not practicing.

“Yeah, I mean, he’s here every day,” Alualu said of Tuitt. “Just in the meetings, getting right both mentally and trying to get right physically, you know, whatever he’s got going on. But a lot of the guys out here are just preparing as if it’s their time then they’ll get the job done.”

Wormley also talked about what all Tuitt has gone through so far this offseason that mainly included him losing his younger brother back in June as a result of a tragic hit-and-run accident.

“Tuitt went through something pretty traumatic this offseason, so we’re giving him as much time as he needs,” Wormley said on Monday. “I think him being around us has been good not only for us, but for him and our morals. And we’re supporting him on his journey on the way back to being with us. And I’m excited for him to come back whenever that time is.”

Alualu was questioned about Tuitt’s immediate future more than once on Monday and the second time he was asked if he’s concerned about his teammate missing Week 1, he was very straight forward again with his answer.

“I don’t have any concerns for him, so, no,” Alualu said.