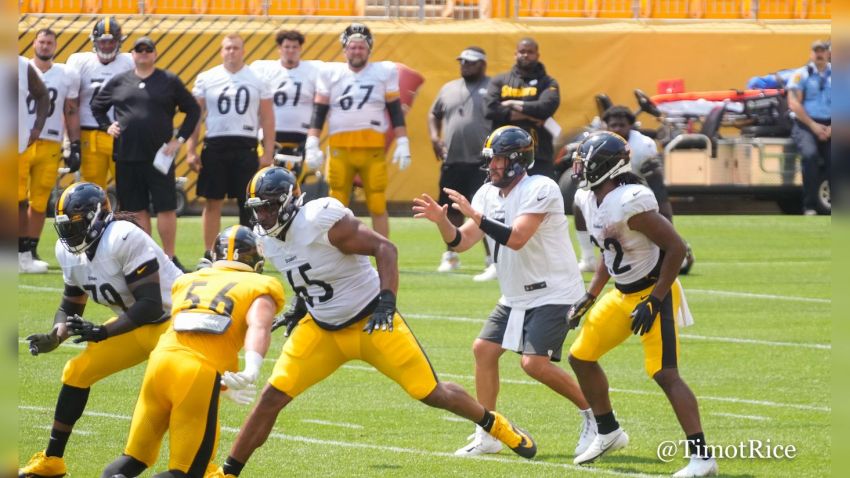 The Pittsburgh Steelers had a significant need to address their offensive line during the 2021 NFL Draft, not just because of the starters that they had lost from the previous season, but also because of the overall performance of the unit as a whole over the course of the last couple of years.

A change was needed, and they already made changes on the coaching staff, swapping out the offensive line coach as well as the offensive coordinator, and along with it, their philosophies. The last piece of the puzzle was adding new linemen.

The Steelers waited longer than most would have preferred, drafting their first lineman in the third round with the selection of center Kendrick Green, but they went back to back after that, following up with tackle Dan Moore Jr. as their first of two fourth-round picks. He has already left a positive impression on new offensive line coach Adrian Klemm.

“I see Dan as just a really mature young man”, he told reporters on Saturday. “Obviously, he had 30-plus starts in college and he played at a high level. But just in terms of going to the left, switching to the right—it was his first day out there [at right tackle] in camp”.

“It was challenging initially, getting used to his stance and all that, but as practice progressed, he never dropped off”, he said, as the rookie adjusted to playing on the right side after working on the left all offseason. “He got better as practice went on, and in [the] two-minute [drill] he actually did a pretty good job”.

Klemm said after the Steelers drafted Moore that he saw the Texas A&M product as somebody who could come in and compete right away. There’s still time left, but it seems as though they are settling on Chukwuma Okorafor at left tackle; presumably Zach Banner is still in line to start at right tackle, as well. But Klemm’s job is simply to get him ready to take on any opportunity that presents itself.

“I think there’s still work every day”, he said. “He’s a student of the game. He’s made some mistakes early on, but as they’re addressed, he’s not an error repeater, and you can always build on that. He has a little ways to go, but I’m pleased with his progress so far”.

Will Moore eventually be a starter for Pittsburgh, and if so, will it happen sooner rather than later? Neither of their current protected starters have ever started and finished a full game at the positions they’re set to play this year, so it’s not unreasonable to think he could be playing in the near future if he shows the requisite growth that provides the coaches with a sense of comfort in putting him on the field.