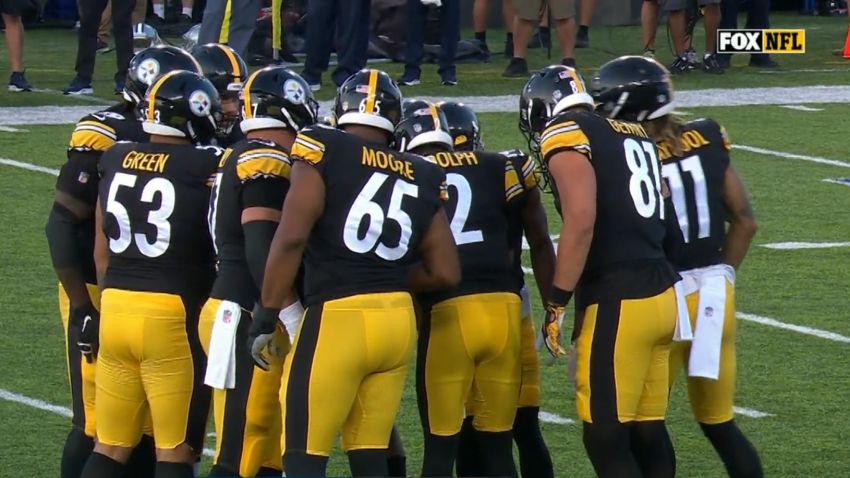 If you’re looking for a young guy on the Pittsburgh Steelers’ roster who has improved his stock the most, look no further than rookie fourth-round draft pick Dan Moore Jr., a tackle out of Texas A&M.

Moore was considered a bit raw coming out of school, but he’s been nothing but consistent and quite the intriguing prospect since joining the Steelers. Moore has stood out in his preseason action thanks to his size and athleticism in space, and has done a great job in pass protection overall, turning heads not only in games, but in training camp practices as well.

Though Chukwuma Okorafor looks to be the starter at left tackle following Mike Tomlin’s comments Saturday, Moore continues to receive praise from guys like Tomlin and now offensive line coach Adrian Klemm, who also spoke to the media Saturday and praised Moore for being a student of the game.

The comments from Klemm come after Moore was spotted working at right tackle in practice, a move from his usual left tackle spot, which means the Steelers are starting to challenge him.

“I see Dan as just a really mature, young man,” Klemm told reporters Saturday. “Obviously he had 30-plus starts in college and played at a high level. But just in terms of going to the left, switching to the right…right tackle, it was his first day out there, I think, in camp, really, and it was challenging initially getting used to a stance and all that. But as practice progressed, he never dropped off. You know, he got better as practice went on. In two-minute [drills] he actually did a pretty good job. And just, I think he’s still working every day, you know, and he’s a student of the game and, you know, he’s made some, some mistakes early on, but as they’re addressed, he’s not an error repeater and you can always build on that. You know, he has a little ways to go, but I’m pleased with his progress.”

With the move to right tackle in practice Saturday, it appears that the Steelers and Klemm are eyeing a swing-tackle role for Moore as the first man up off the bench at either tackle spot in case of injury, which is a significant development for the Steelers.

Veteran Joe Haeg was initially brought in to be the swing tackle Steelers, but if Moore is progressing this quickly and picking up the offense at both left and right tackle, the 2021 draft class looks even better on paper.

Moore’s development will be a key piece to watch throughout the rest of training camp and the 2021 season. He could be a long-term fixture at tackle for the Steelers, which would be quite the find for veteran General Manager Kevin Colbert.