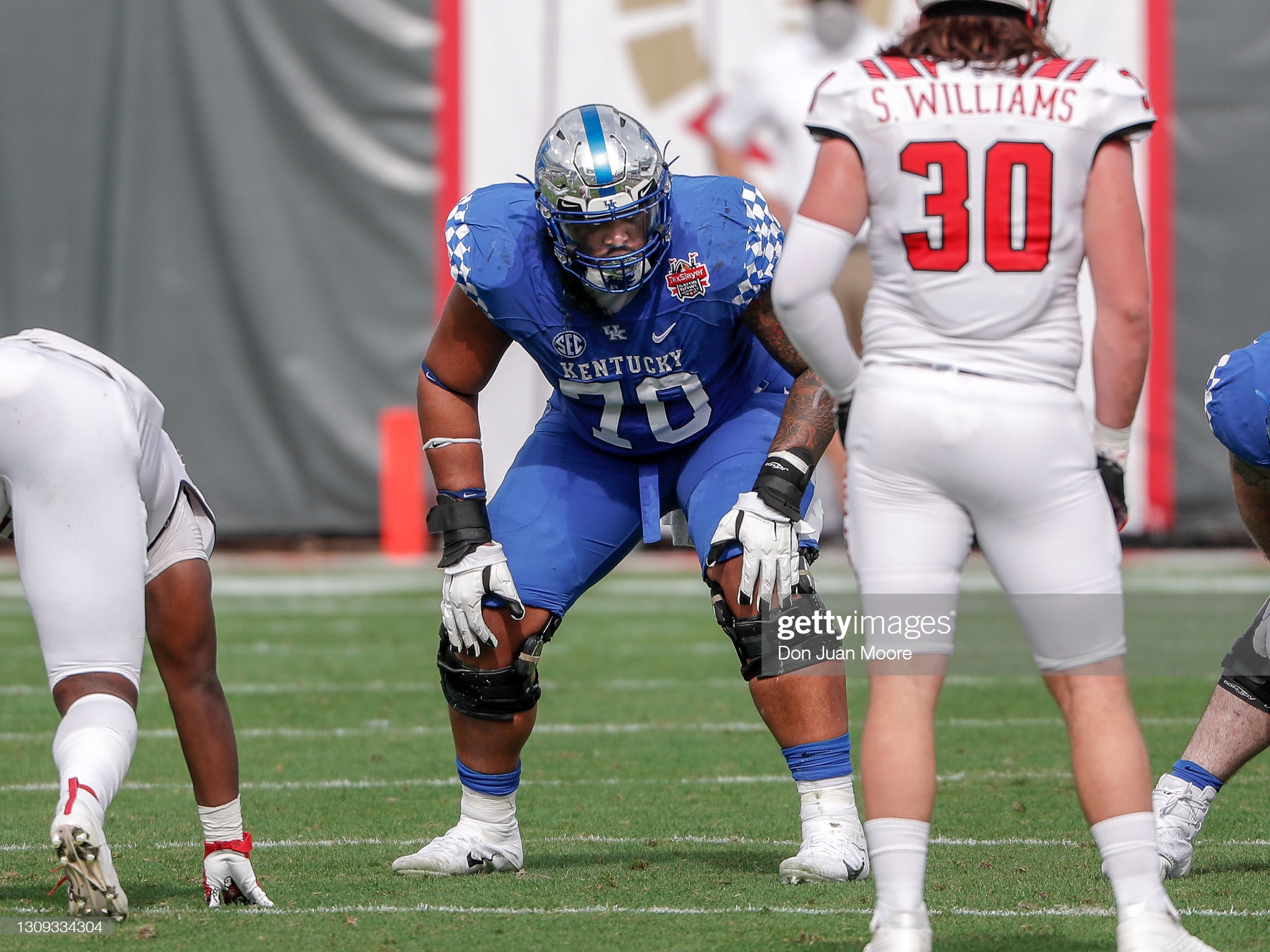 Seven years ago, the Pittsburgh Steelers went to one of the non-power programs in the SEC with their first round pick, and selected Bud Dupree of the Kentucky Wildcats. In the latest edition of the 2022 mock draft roundup, one writer has the Steelers returning to the Wildcats, but focusing on the opposite side of the ball with the pick.

Releasing his first mock draft of the season, The Draft Network’s Joe Marino went away from the players appearing frequently in mock drafts, and selected Kentucky tackle Darian Kinnard for Pittsburgh at 13th overall. In explaining his selection, Marino wrote:

Once a strength of the team and lauded as one of the best offensive lines in the NFL, the Steelers offensive line looks a lot different than it has in recent years entering the 2021 season. There are some likable young pieces in Kevin Dotson, Kendrick Green, and Dan Moore, but the tackle combination of Chukwuma Okorafor and Zach Banner is concerning.

Kinnard is a massive man that brings elite functional strength to the table. He’s a mauler in the run game and his anchor in pass protection is stout. He does need some technical improvements with his hand and footwork, but his power at the point of attack is elite. With the arrival of running back Najee Harris and long-term uncertainty at quarterback, the Steelers are likely to embrace a run-first mindset on offense, which makes Kinnard even more of a sensible option.

Kinnard’s name, like many appearing in Marino’s first round, is not one that appears often in mocks ahead of the 2021 college season. But Marino focused his draft on names that project as first-rounders with another season of experience and growth, and Kinnard meets that qualification coming off an All-American season as the leader of the Wildcats’ line, which blocked Kentucky to the third-most rushing yards in the SEC last season.

Kinnard, a preseason All-American this year, is a big-bodied tackle at 345 pounds as listed by the Kentucky website. He simply doesn’t get pushed around off the line and has strength to spare, and fits the physical, mauling mindset the Steelers are embracing this season under new OL coach Adrian Klemm.

As Marino states to support the pick, Pittsburgh has younger building blocks along the line, and those are already starting on the interior. But tackle is a big weakness, with neither Chukwuma Okorafor or Zach Banner a long-term answer at the moment at the position. Pittsburgh was strongly linked to players like Teven Jenkins in the 2021 Draft. Unless two of Okorafor, Banner and Dan Moore Jr. (a rookie who might be fighting his way to the starting left tackle job) prove they are starting material in 2021, Pittsburgh will be one of the neediest teams at tackle in the 2022 offseason.

Kinnard is the fourth lineman off the board in Marino’s mock. Led by Alabama tackle Evan Neal at fifth overall to the Cincinnati Bengals, Washington’s Jaxson Kirkland and Texas A&M’s Kenyon Green also went prior to his selection of Kinnard to the Steelers.