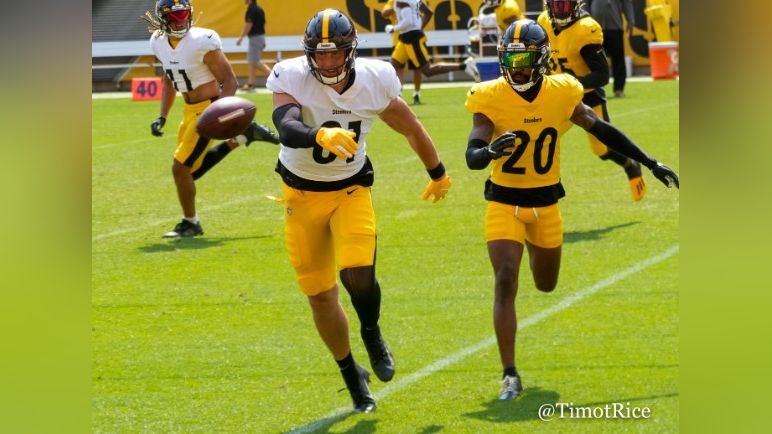 Reasoning: While the third-year tight end has not been afforded many opportunities during the preseason to demonstrate his receiving abilities, he did put his progress in the blocking department on display, which may ultimately win him his roster spot.

The Steelers actually have several roster battles that I think can be argued as being hotly contested, and perhaps even going down to the wire. One of them is the competition for the third tight end spot, taking place between third-year Zach Gentry and first-year Kevin Rader, who despite lacking an accrued season has been around for a couple of years.

Gentry was a fifth-round draft pick in 2019, but he has spent the majority of his career as a healthy scratch. Of course, Rader has been on the practice squad during that time. But he did get called up after Gentry was injured a year ago, and showed that he could be a contributor on special teams.

Gentry’s recent display of in-game blocking ability, particularly in pass protection, could be the game-changer that he needs to secure his place on the team now that he is presumably off of his ‘redshirt’ period, as a player who was drafted with the understanding that he would need time to develop.

The Steelers drafted him because of his size and his ability to field the ball, so I don’t think it’s really a matter of making some catches in the preseason. He has been showing up in this department on the practice field for a while, anyway.

But Rader, who may be the most NFL-ready blocker at the tight end position on the roster right now, has also been showing some receiving ability as well. Looking at it objectively, it’s really difficult to say who is the better tight end right now between Gentry and Rader.

Either of them, I think, could potentially fill in as a serviceable number three tight end. The question then becomes whether or not the Steelers will even use the third tight end, as a team who has favored an extra lineman.