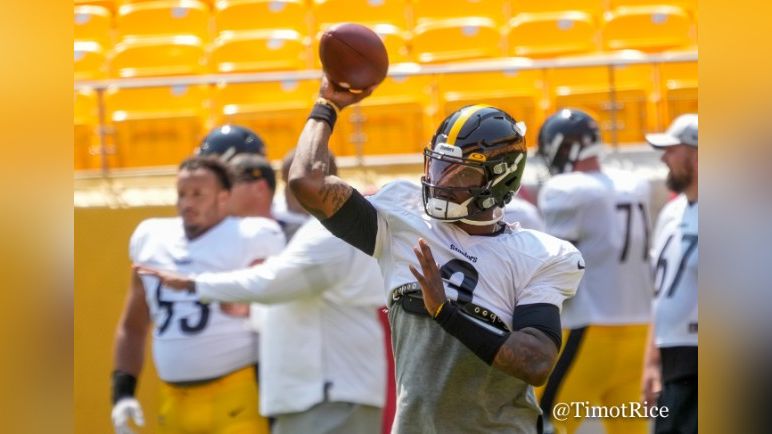 Reasoning: The third-year quarterback has been making plays, particularly down the field, so far in training camp, potentially putting his name in the conversation for the backup job by the end of the preseason.

Is it time to start talking about the backup quarterback position and whether or not it is open for competition? Of course, technically, head coach Mike Tomlin has already declared all position open (as he does every year), but can Dwayne Haskins really open the competition for the number two quarterback?

There is some precedent for surprise. Joshua Dobbs ended up as the Steelers’ backup for the 2018 season, displacing veteran Landry Jones altogether as Mason Rudolph got a redshirt year. Rudolph has been the backup since then, outside of a five-game spell in 2019 during which he was benched, but he isn’t guaranteed to retain the job.

Earlier this offseason, the Steelers extended his contract one year to keep him in the building for 2022 as an insurance policy, in the event that Ben Roethlisberger is gone and they don’t have another option. But Haskins, a 2019 first-round pick of Washington’s, was signed to a Reserve/Future contract back in January.

Based on training camp reports, he is starting to look the part, and being able to make some plays down the field, even showing some mobility. He may have floundered as a starter in Washington, but that doesn’t mean he isn’t good enough to be a number two.

There is still a long way to go, and the preseason will be the primary barometer, but if Haskins actually outplays Rudolph and shows a good level of understanding of the offense, I don’t see that Tomlin would still favor Rudolph to be the number two. After all, even last season, when Rudolph started the finale, they were giving Dobbs some snaps.

They have expressed confidence in him up and down, but there’s a reason they decided to kick the tires on Haskins. That’s what they’re doing now, and there might be some air in them after all. If that’s the case, this could be an interesting exhibition period. We’ll find out more Thursday night.