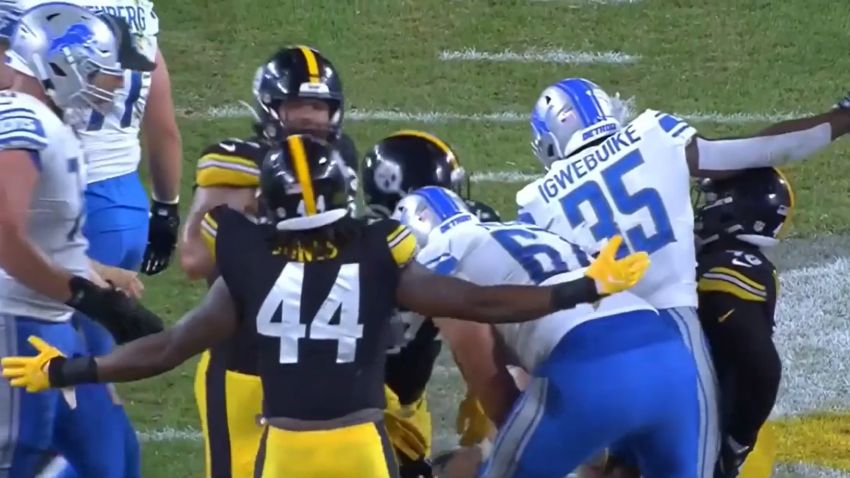 Reasoning: The first-round outside linebacker has continued to impress, recording another half a sack on Saturday against the Detroit Lions, as he looks to fight for a spot on the 53-man roster.

Considering the hand-wringing that began the offseason as the Steelers lost Bud Dupree in free agency, the Steelers’ pass rush has certainly looked pretty potent overall. And T.J. Watt hasn’t even been on the field yet.

While the success of their pass rush has been due primarily to the development of second-year edge rusher Alex Highsmith and the free agency acquisition of Melvin Ingram, signed shortly before the start of training camp, the Steelers have also been generating pressure with their depth as well.

Both first-year Jamir Jones and rookie sixth-round pick Quincy Roche have stood out so far, and at this point, one would have to figure that it would be a surprise if at least one of them doesn’t make the 53-man roster. But they very well may be competing for just one place.

Jones, though, has been one of the Steelers’ most consistent players so far this preseason. In 20 snaps against the Detroit Lions, he secured two tackles and split a sack with Marcus Allen, who came in on a blitz. He had three pressures in total, including one hit and one hurry in addition to the split sack.

According to Pro Football Focus, Jones has generated nine pressures so far this preseason in three games, across 63 pass-rushing snaps, which is a pretty healthy amount. He has also looked solid against the run, and he has logged 38 snaps on special teams, generating three tackles.

As those who have been following my 53-man roster predictions know, Jones is the one player I have perhaps gone out on a limb for in favoring him for a roster spot, as I have skewed heavily conservative in some of my decisions even if I felt the progression of events would lead to one player making it over another that I had on the list at the time.

If Jones finishes out the preseason with one more strong game this week, I believe he will wrap up a roster spot. Or I could be completely wrong. It won’t be too long now before we find out.