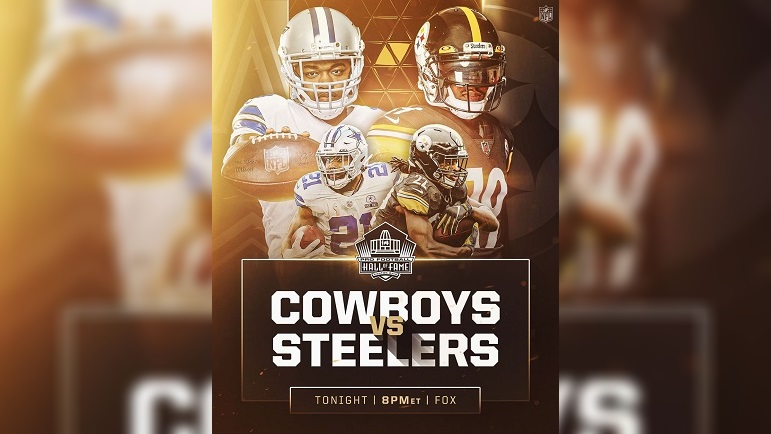 We’ve seen you’re typical Hall of Fame game thus far. A lot of vanilla offense with mistakes from both sides, hence the low-scoring game. If you’ve been able to watch the game through the continuous sideline interviews, you were able to see a solid first game by Steelers first-round draft pick, Najee Harris, showing a bit in all three phases of a running back (running, catching, blocking).

In true Hall of Fame game fashion, the player of the game this far very might well be rookie punter Pressley Harvin III. He had two beautiful punts pinning the Cowboys at their own 11-yard and 1-yard line respectively.

Outside Mason Rudolph’s deep ball to Claypool, he’s looked like the same old Rudolph. We’ll see what Dwayne Haskins has in store in the second half.

The other winner of the day so far has been Alex Highsmith. He continued to build off his strong showing at camp with a sack off a spin move, multiple pressures, and a few run stops. He’s looking to have a strong sophomore season.

Steelers start the 2nd half on defense and come out noticeably more physically than the first half. 6th-round outside linebacker, Quincy Roche, gets his first sack. I think that’ll be the first of many for him.

Matthew Sexton, nicknamed “Cheddar Bob” on the team has a great punt return back to the Steelers 35 yard-line.

Kalen Ballage first TD of the Steelers’ 2021 season. He powered his way over the goal line. Career numbers don’t look good but he’s had a lot of success in short-yardage situations. Kevin Rader heck of a block to lead the way.

In total there’s been four missed kicks between the two teams, all to the right.

NFL decides to move the uprights 10 yards to the right and Boz might have some competition. https://t.co/pirmvWoQwb

Rookie undrafted free agent, Donavan Stiner, out of Florida, with a great read as the deep center fielder and picks off the ball on the Cowboys’ second drive of the half. Gets props from Hall of Fame inductee John Lynch in the booth.

Ballage looking solid on his carries. They get the Steelers in striking distance but Haskins not pushing the ball down the field at all. Tons of check-downs. Sam Sloman gets another shot and drills a 48-yarder. Steelers 9 Cowboys 3.

Skakur Brown been around the ball a ton on special teams. He has 2 tackles on teams and just got another hat on the returner following the made field goal. One way to make the back-end of the roster.

Steelers rookie linebacker, Buddy Johnson, makes his first play. Shows good awareness and sniffs out a screen, lays a big hit on the back as the ball falls incomplete. Gets the Steelers’ defense off the field.

Rico Bussey makes his first appearance on the stat sheet. Catches a ball on 3rd down but isn’t able to break a tackle, gets tackled short of the marker.

Bringing out the player of the game Pressley Harvin III with ANOTHER bomb. This time 51 yards and goes out of bounds at the Cowboys’ 11-yard line.
A couple of CBs using their length on this Cowboys’ drive. Mark Gilbert showed fluidity on his speed turn to close and knock it away. Stephen Denmark good contest downfield, the Steelers get the stop on 4th and 1.

Josh Dobbs finds Tyler Simmons on an out route from the five-yard line with 8:44 remaining. Sloman's PAT is good. Steelers 16 Cowboys 3.

Mark Gilbert makes another great pass deflection, this time on a slant route. The defense gets off the field again, been very stout this second half.

Just how you draw it up, the Cowboys’ returner muffs Harvin’s punt and it’s recovered by Anthony Johnson. Still no return yards off of Harvin punts.

Following the two-minute warning, the Steelers turn it over on downs at the 5-yard line after Dobbs throws it incomplete, intended for Kevin Rader.

Carlos Davis and Abdullah Anderson flash some impressive interior rushes on the Cowboys’ final drive, Anderson finishing his with a sack