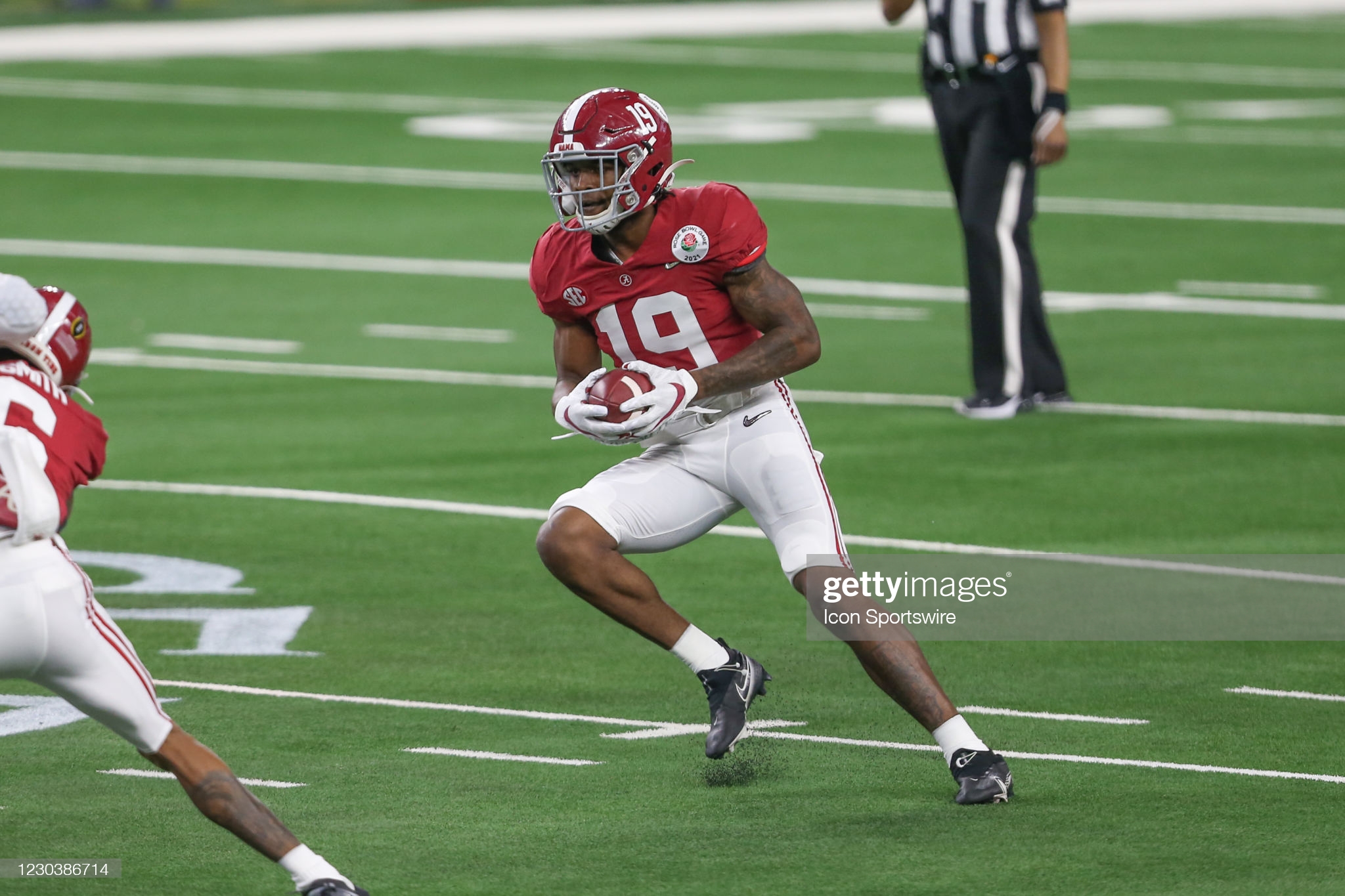 NFL teams are back in training camps. But they aren’t the only teams getting ready for an upcoming season. The 2021 college football season kicks off even earlier, with the first games starting August 28. That will begin the movement up and down boards for all draft-eligible prospects, which will continue up until April 28.

So before the season begins, I’m going position-by-position through the 2022 class, and previewing some names to know and be watching for throughout the college football season from a draft perspective. This is not an exhaustive rundown of every draft-eligible player, but a look at some of the more prominent and interesting names to watch this upcoming season, and where they are currently projecting for the upcoming draft. This preview continues on offense, with the tight ends.

With the selection of Pat Freiermuth in the second round of the 2021 NFL Draft, the Pittsburgh Steelers preemptively addressed an upcoming need at the position, saving this from being a major focus for a weak 2022 class. Freiermuth is a backup this season, but fits the mold the Steelers like in their tight ends and will take over as a starter next season.

Where a need will arise is behind Freiermuth. Eric Ebron, the starter in 2020 and 2021, is a free agent after this season, and will leave Pittsburgh in need of someone to replace his spot in two tight end formations moving forward. That could be addressed with a player similar in style to Freiermuth as a capable receiver and blocker, or Pittsburgh could prefer to bring in a player who is a more dynamic and athletic receiving threat at the expense of blocking, similar to Ebron and before that Ladarius Green.

Backup tight end is not the most pressing of needs and won’t draw a Day 1 or 2 pick to address it, but it’s a spot the team absolutely has to fill next offseason, unless Zach Gentry or Kevin Rader takes a huge step forward this season.

Jalen Wydermyer, Texas A&M: The near-consensus top tight end thus far in the 2021 class, Wydermyer is a big-bodied, athletic player who is a receiving option first and foremost with almost 1,000 yards and 12 touchdowns to his credit with the Aggies in two seasons. Improvements to blocking will boost his stock as the first TE drafted.

Jahleel Billingsley, Alabama: Another receiving-first tight end, Billingsley lacks the numbers of Wydermyer after getting buried behind several first-round picks at wide receiver over the last two seasons. But in his limited 20-catch career with the Tide, Billingsley has shown he is a field-stretcher with enough athleticism to beat opposing coverages, make acrobatic catches, and add yards after a catch. Earning a more prominent role in Alabama’s pecking order would turn this spot from projection to reality.

Jeremy Ruckert, Ohio State: Ruckert, like Billingsley, has spent his collegiate career getting stuck behind past and future early-round picks at wide receiver. But in limited work, he has shown a steady ability to get open in the end zone — almost one third (nine) of his 28 career catches have gone for touchdowns. Lacks elite speed but is a very dependable receiver and strong blocker, a steady all-around tight end prospect.

Will Mallory, Miami (FL): A player who does his work in the short and intermediate fields with the ability to sneak through a defense on a deeper route, Mallory is another tight end who could be helped significantly by a long-awaited breakout season in 2021. He has the requisite size and some plus speed, and comes from a family of former players and coaches.

Charlie Kolar, Iowa State: A receiver who can make the tough catches and out-muscle his coverage (one of the biggest tight ends in the class at 6’6″, 260), Kolar is a player with the ceiling to challenge for the top couple spots in the 2022 class at the position. Brings an NFL-caliber skillset to his work as a receiver and as a blocker, at the line and in the second level. Upside is high, even with lack of top-end athleticism.

Cade Otton, Washington: Otton’s 2020 numbers (18 receptions, 258 yards, three touchdowns) look unimpressive until you realize he played only four games that season. Earning Pac 12 recognition that year and preseason All-American status this year based on that breakout, Otton is the latest in a line of Husky tight ends that will be drafted into the NFL. A strong catcher who can retain through contact, Otton likes physical play, and is an excellent blocker. One of the more NFL-ready tight ends ahead of the 2021 season, with some upside to boost his stock.

Austin Stogner, Oklahoma: Stogner will be a quarterback’s best friend with his ability to read defenses and find open areas to hit against zone coverage, and helped Spencer Rattler out at OU last year with over 400 yards receiving in eight games. Draftable already with NFL upside, but has room to improve as a blocker at the line and becoming a more consistent receiving threat. Already a prospect to watch, but a very high ceiling if he develops further in 2021.

Cole Turner, Nevada: Among all returning FBS tight ends, Turner’s 605 yards last season were the most, and his nine touchdowns were second-most. One of the two favorite targets for potential first-round QB Carson Strong, Turner is a 6’6″ body with experience using his size to win contested catches, and is not afraid to muscle up defenders in the air or as a runner. Add in some sneaky athleticism, and Turner is a trendy pick to rise up the draft.

Isaiah Likely, Coastal Carolina: Just a few yards back of Turner for the most of any returning FBS tight end this season. Likely has one of the largest resumes of any tight end in the class, with three full seasons for Coastal, two 30-catch seasons, and five touchdowns all three years. Had 431 yards in 2019 before breaking out with 601 last season, used to all fields as a route runner and was a frequent target on deep throws. Good athleticism and speed, even if he won’t outrun NFL DBs like he did in the Sun Belt.

Sam LaPorta, Iowa: A junior waiting for his breakout season after two years as a part-time starter, with 42 catches and 459 yards. A short-field tight end who can occasionally make plays to the intermediate level, LaPorta is someone projectable to a backup role in the NFL as a QB safety net and blocker, the type of player every NFL team needs behind the starter. More consistent play this year, projected as the Hawkeyes’ starter, and a boost in production would help his case.

This doesn’t look like a very strong tight end class, and lacks the type of generational talent at the position like Kyle Pitts to help buoy it in the way he helped the 2021 class. Wydermyer is the likeliest to earn himself a first-round draft slot next April, but I think the highest upside in the class belongs to Billingsley, who is an excellent receiver and one of the best athletes at the position in college right now.

Two names that would not surprise me a bit to see challenge for the top spot in the class, and provide very high upside, are Kolar and Turner. Neither is an uber-athletic tight end (Turner closer than Kolar), but both are strong receivers and weapons that can start in the NFL. Ditto for Stogner, who has similar upside if he can show improvements this season to his game.

From a Steeler-specific perspective, whichever names emerge as the best in the class are out of range after last year’s investment of a second-rounder in Freiermuth to be the future starter. With an upcoming void for the top backup, any depth options are in play. Turner and Kolar would be steals, but Stogner might profile the best of the three to the team’s offense. One step better is Ruckert, a player who would fit perfectly with the team and potentially come at an affordable cost in the draft. Otton is close to being as good a fit but may price himself out of range, and LaPorta doesn’t have the upside of either, but is another who fits. If the team wants more of a pure field-stretching receiving threat, Likely stands out, in addition to the above mention of Turner.