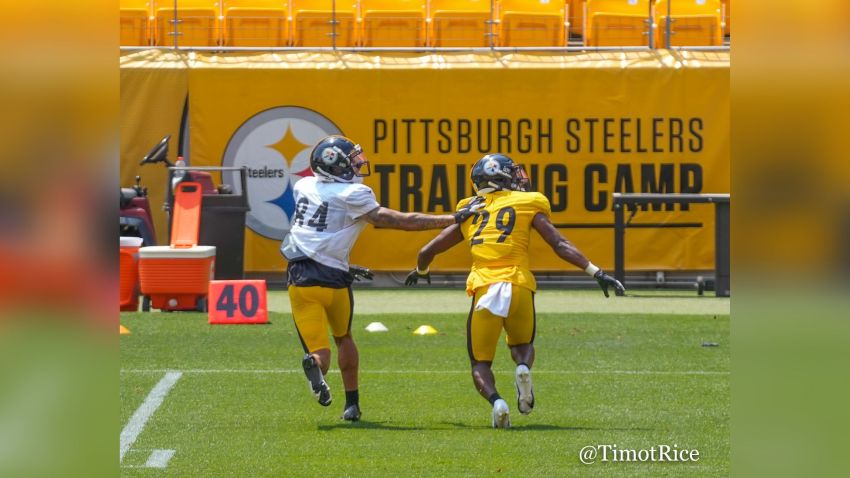 The Pittsburgh Steelers didn’t think much of the fact that they were giving out the number 84 to a young wide receiver out of Central Michigan named Antonio Brown. A fringe roster candidate as a sixth-round draft pick back in 2010, he would go on to become the greatest pass catcher in team history.

Over the course of nine years with the Steelers, he caught 837 passes for 11,207 yards and 74 touchdowns. Their relationship ended badly, and dramatically, after the 2018 season, but that does not take away what he achieved on the field, and any wide receiver coming into the league knows exactly what 84 in black and gold means.

That jersey is now being worn by rookie college free agent Rico Bussey, who spent most of his college career at North Texas before transferring to Hawaii in 2020. He has been having a good training camp so far, but today’s practice was such a highlight that the media requested to speak with him, making a number of big plays down the field.

He also made it very clear that he didn’t ask for it. It was just given to him. Then again, it was the only jersey number in the 80s available at the time, other than 89, so there weren’t a lot of options to begin with, as is always the case on a 90-man roster, and being one of the last to be added. “I just got the jersey. I didn’t even come in in a position to be able to ask for anything, really”, he said.

Bussey had a standout college season in 2018 for North Texas, during which he caught 68 passes for 1,017 yards and 12 touchdowns. He only played in two games the following season due to injury, however, and then just seven last season during a pandemic season in Hawaii. He also told reporters that COVID-19 screwed up his rehab and physical conditioning, so he doesn’t view this past season as a reflection of who he is.

He knows, instead, that he’s the guy who put up numbers now three years ago, and he’s a man on a mission to prove it, as he tries to convince the Steelers to carry six wide receivers. He’s so focused that he didn’t even notice if he got the AB treatment, of fans calling him by his predecessor. “Not that I know of. I don’t really pay attention. I was just trying to focus on what I’ve got to do”, he said.

Of course, if he actually makes the roster, it remains to be seen whether or not he would keep that number. But he certainly seems happy to be wearing it, and I don’t think the Steelers will mind giving out the number again, even if this is the first time it’s been given out since Brown’s departure.