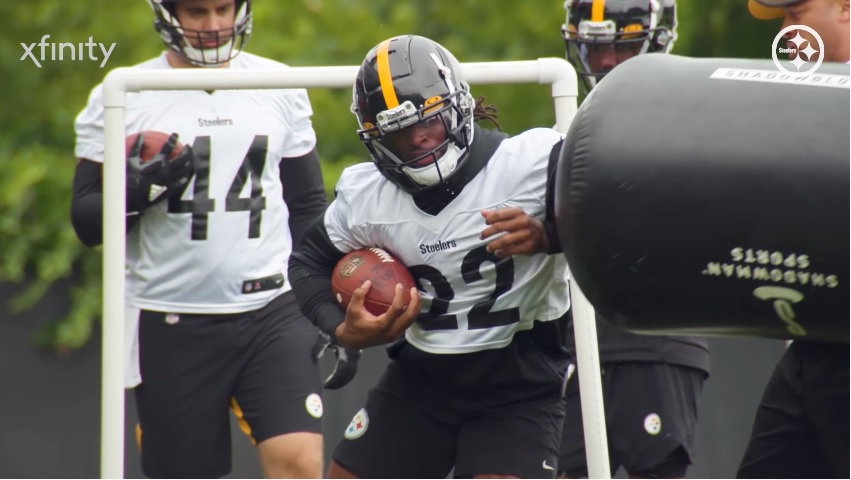 You can already pencil it in as one of the training camp storylines. At least, Mike Tomlin is. Devin Bush versus Najee Harris. A couple of high pedigree, first-round picks testing each other this summer.

Yesterday, the Steelers’ YouTube channel posted their latest edition of “The Standard,” an ongoing series that looks at moments like the draft and the offseason. The most recent episode recapped the team’s spring workouts. Mike Tomlin was mic’d up for it and the cameras caught him getting Harris ready to take on Bush this summer.

Here’s a clip of Tomlin telling Harris what’s to come.

“I’m going to reserve 22 for Devin Bush,” he says before talking to Harris. “You’re going to cover him, he’s going to have to pick you up in blitz.”

It’s that iron-sharpen-iron mentality Tomlin has preached over the years. And camp will be a great test for each guy. There will be plenty of chances for 1v1 battles. RB/TE vs LB coverage drills and of course, the famous backs on ‘backers sessions. If this year is like season’s past, the first one should take place on July 28th, the first day of padded practice.

Bush, of course, hasn’t yet to square off against Harris. Still rehabbing from his torn ACL, he’s participated to some degree in the spring workouts but wasn’t part of team or competitive drills. It’s uncertain if he will have full clearance for the first padded practice or if the team will bring him along slower than that. Him starting the year on Active/PUP is highly unlikely, his rehab seems to have gone well, but the team may still ease him back into 100% participation.

The good news is we’ll be there for most practices to report what’s going on. Watching a rookie in Harris and talented player like Bush will be at the top of our list.