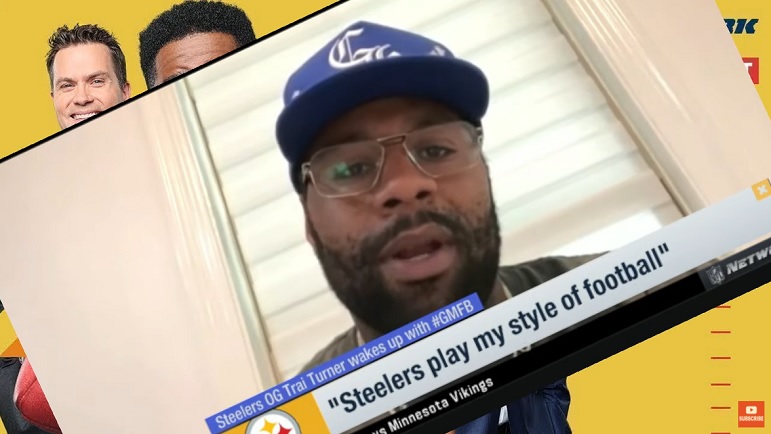 Not only will the Pittsburgh Steelers have a new starting running back in 2021 in the form of rookie Najee Harris, but they will also have a new starting right guard as well. Veteran Trai Turner was signed a few weeks ago to replace David DeCastro, who surprisingly had his contract terminated at the conclusion of the team’s mandatory minicamp. While Turner has yet to practice with the Steelers since he was signed to a one-year, $3 million contract, he already knows enough about the rookie running back he’ll be blocking for in Pittsburgh to form a good opinion of the Alabama product.

“I think he is a phenomenal athlete,” Turner said of Harris during a Tuesday morning interview on NFL Network’s Good Morning Football show. “I think he’s a great running back, man. I was able to watch him. I went to LSU, so I was able to see him on the other side of the field a couple of times. And I’m just, I’m eager to see what he does, man. I think the kid works hard. I think he’s eager just to hit the field and just from what I’ve been seeing, man, he looked like he’s in great shape. So, I think he’s going to do well.”

The Steelers haven’t had a strong and consistent running game in several seasons, and the priority this offseason has been to change that. Not only has the Steelers’ offensive line been reworked this offseason, but the coaches of that group have also been, as well. Adrian Klemm is now in charge of the unit with a very experienced Chris Morgan being hired to serve as his assistant. These offseason changes and focus on running the football more often and more successfully in 2021 certainly is music to Turner’s ears.

Tuner a five-time Pro Bowler already during his NFL career, is now looking to prove in 2021 that he still has what it takes to be a premier guard on the heels of him going through a rough 2020 season that included him missing roughly half of it due to a groin injury. Based on what Turner said Tuesday morning, he’s back healthy again and thus now ready to prove with the Steelers in 2021 that he’s still one of the top guards in the NFL.

“I’m feeling like myself,” Turner said. “I’m excited about the season. I’m ecstatic to get to Pittsburgh and just get to work. Um, I just can’t wait, man. Last season was tough. It was different. It was one of those things where you know there was a lot of things that happened I couldn’t control. But, hey, it’s a new year, new beginnings and I’m with a new team and I’m excited about it.”