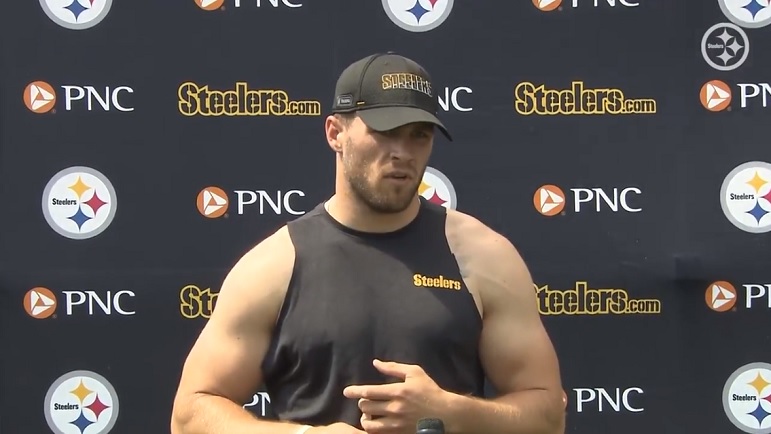 The prevailing thought currently is that the Pittsburgh Steelers will get outside linebacker T.J. Watt signed to long-term contract extension sometime before the start of the 2021 regular season, which is now 52 days away. While a Watt extension seems bound to happen, the Steelers’ former first-round draft pick out of Wisconsin didn’t tip his hand on Thursday after the team’s training camp practice when it comes to how any negotiations might be going right now, if any are at all.

“It’s not for me to say. That’s pretty much all I’ll say about it,” Watt said Thursday when asked if he’s confident an extension will get done this summer.

Watt also made it clear on Thursday during his media session that the thought never crossed his mind to report to training camp late in hopes of getting a contract extension done before risking suffering an injury in practice.

“No, I mean, I love this team,” Watt said. “I love all the coaches and the staff here and the players, and I’m excited to be here. And that’s why I’m here.”

Steelers head coach Mike Tomlin was also asked about Watt reporting on time for camp this year despite his contract situation.

“It doesn’t tell me anything that I didn’t already know about T.J.,” Tomlin said of Watt. “You know, what can you say about him that hadn’t been said?”

So, does Tomlin think the Steelers will get Watt signed to a new deal in the next 52 days?

“I’m sure that process will run its course and we’ll have something to report,” Tomlin said.

Does Watt hope a deal gets done?

If things go like most think they will, Watt will become the highest-paid defensive player in the NFL by the time Week 1 rolls around. That would mean a contract extension that has a new money average likely between $28 and $30 million. Watt is currently scheduled to earn $10.089 million in 2021 as a result of the fifth-year option in his rookie contract being picked up by the Steelers well over a year ago.

While Watt waits to see how the next 52 days will go for him, he sounds happy and ready to continue working hard in training camp at getting ready for the 2021 season.

“I love Pittsburgh. Obviously, I would love to be here,” Watt said on Thursday. “All those decisions aren’t really mine to be made. So, I’m just here right now trying to get better each and every day.”