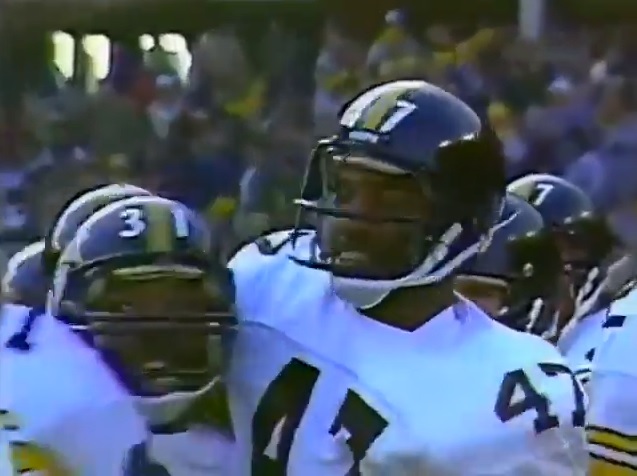 Mel Blount had an incredible, Hall of Fame career. First in team history with 57 interceptions, his final one came in 1983, in a game against the New York Jets memorable for lots of reasons. It was the last game Terry Bradshaw would ever play in, throwing his final pair of touchdown passes as the Steelers comfortably handled the Jets. It marked the final game played in Shea Stadium, too. Like almost all of their post-Namath history, this was a game Jets’ faithful probably want to forget.

Pittsburgh’s defense picked off the uh, dynamic duo of Richard Todd and Pat Ryan three times this day. Ron Johnson had the first, Donnie Shell the second, and Blount capped things off with a third-quarter pick. Shell should receive an assist, the ball inaccurately thrown and clipping his arm into Blount’s hands. It came one play after Jets’ DB Johnny Lynn intercepted Cliff Stoudt, swinging momentum back in Pittsburgh’s favor.

Here’s Blount’s last INT with some celebration mixed in and a cool, All-22 angle from up above.

That was Blount’s 199th regular season game. He’d reach the 200 milestone in the finale the following week, a 30-17 loss to the Cleveland Browns. Pittsburgh’s season — and Blount’s career — would end in the playoffs against Baltimore, an ugly 38-10 defeat.

That offseason was similar, really worse, than the era that’s closed this past year. After ’83, Bradshaw and Blount retired while Franco Harris was granted his release and signed with the Seattle Seahawks. Three heavy hitters and core pieces of the 70s dynasty gone over the span of a handful of months.

That ’83 game was the last bit of glory from that group. Bradshaw tossing touchdowns, Blount picking off passes, and Harris churning out a 100-yard performance, the last of his career. That was the book closing on the dynasty. We just didn’t know it yet.