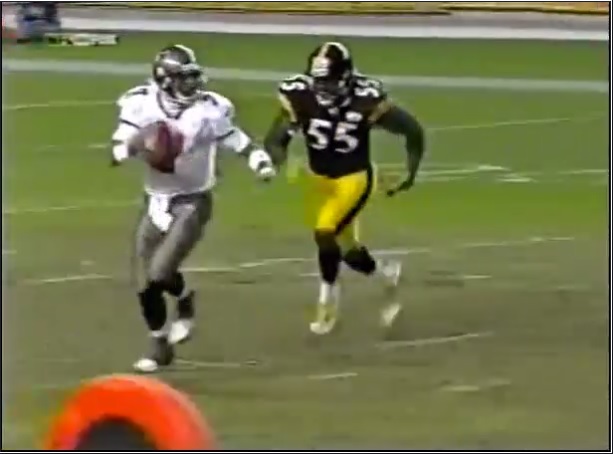 Unlike Lynn Swann or Hines Ward, Porter’s NFL success didn’t end in Pittsburgh. So his final Steelers’ sack doesn’t feel as final as the others. He would go on to have a career year in Miami, posting 17.5 sacks in 2008.

But his final year in the black and gold came in 2006. And his final two sacks came in the same game, a 20-3 Week 13 win over the Tampa Bay Buccaneers. He notched his first one on Tampa Bay’s opening drive. His second came a quarter later. On 3rd and 7, he chased down QB Bruce Gradkowski, a Pittsburgh native who would eventually wind up a Steeler himself. Aaron Smith came free up the middle, flushed Gradkowski to his right, and Porter chased him down.

Porter would have a quiet final month to the season, failing to record a sack and registering just one QB hit. Releasing Porter was one of Mike Tomlin’s first moves on the job and Porter inked a five-year, $32 million deal with Miami one week later. After an average first season, he bounced back in 2008 and 20009 with a combined 26.5 sacks, though the Dolphins cut him after the ’09 season. He spent his final two seasons with Arizona, recording the final sack of his pro career in 2011, dropping Seattle’s Tavaris Jackson.

When Porter was released, he was second on the Steelers’ *official* all-time sack list, only trailing Jason Gildon. The man who replaced Porter, James Harrison, would go on to become the team’s official sack leader, surpassing Porter in 2012 and Gildon in 2017.

Porter finished his career with 98 of them. Of the 1999 NFL Draft Class, no one had more sacks than he did. Patrick Kerney came in second place with 82.5 of them while Jevon Kearse came in third, though he likely would’ve finished first had it not been for injuries.