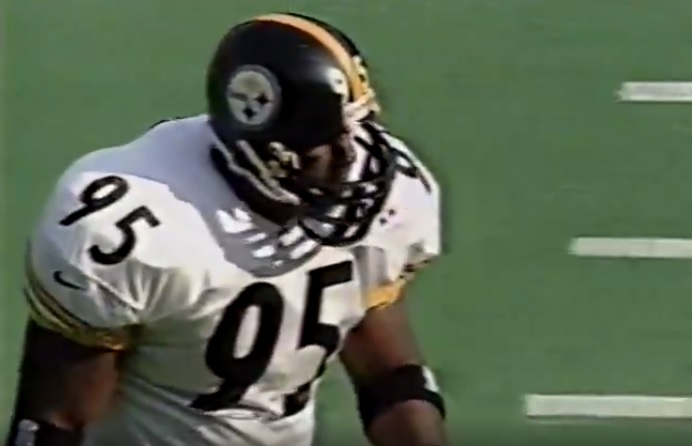 There are certain Steelers whose on-field play embodied what the team was about. Guys like Jack Lambert, James Harrison, and definitely Greg Lloyd. Fierce, tough, no-nonsense linebackers who could dominate the gridiron then throw back a six-pack after the final whistle.

That was Lloyd for his Steelers’ career. But a torn ACL robbed him of nearly all his 1996 season. He came back for ’97 but at 32 years old, he wasn’t the same guy. Though he started each game, he recorded just a half-sack through the team’s first nine games.

But he emerged to prime-Lloyd play for his final three games, registering a sack in Weeks 11-13. The final came on the first drive against the Philadelphia Eagles. Quarterback Bobby Hoying was making his second career start, tying against the Ravens the week before. On his third dropback, Lloyd ran around Jermane Mayberry and knocked the ball out of Hoying’s hand.

Burly nose tackle Joel Steed let the ball through his hands, nothing-but-net style, right tackle Barrett Brooks, who would eventually sign with the Steelers, fell on the football.

That took the Eagles from 1st and 10 to 2nd and 19 and eventually led to a punt. But Hoying and the Eagles got the last laugh. Hoying tossed two touchdowns and upset the Steelers 23-20 that day.

Later in that game, Lloyd injured his ankle and played through the sprain throughout the second half. But a staph infection developed that kept him out of the team’s final four regular season games. He joined the Panthers in 1998, recording just one sack in 14 starts. Writing on the wall, he retired after the season.