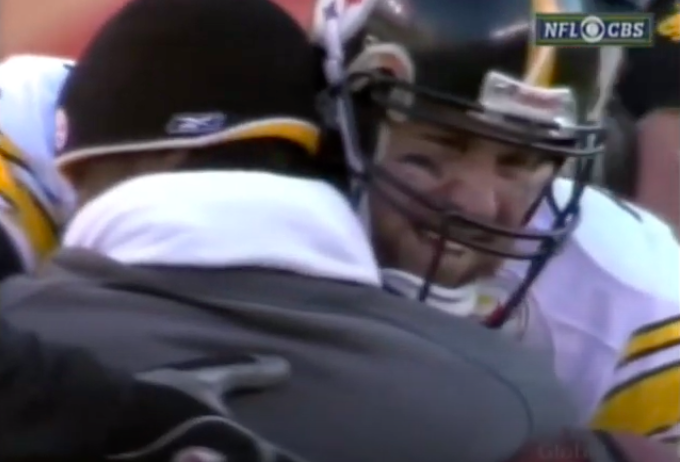 On the road for “one for the thumb,” the Pittsburgh Steelers had one more final true hump to get over before making a stop in Detroit, and it would be arguably their toughest test: Mile High Stadium to take on the Denver Broncos in the AFC Championship Game.

It’s always hard to play at Mile High considering the altitude, but the Steelers went in as the clear underdogs and continued their magical run in the 2005 playoffs, cruising to the AFC title.

One week after giving many Steelers’ fans a heart attack following Jerome Bettis’s fumble and Mike Vanderjagt’s missed field goal, there was no doubt about the outcome of the AFC Championship Game as the Steelers jumped out to a 24-3 halftime lead and never looked back on the way to a 34-17 win and a sixth appearance in the Super Bowl.

Heading into Mile High to take on Mike Shanahan, Jake Plummer and the 14-win Broncos, the Steelers turned their second-year quarterback loose, letting Ben Roethlisberger showcase just what he could become, completing his first five passes of the game to march the Steelers down the field on their first drive.

Roethlisberger hit Willie Parker for 8 yards, Antwaan Randle El for 20 yards, Parker for 5 yards, Hines Ward for 7 yards and Nate Washington for 13 yards before taking a sack and later firing incomplete looking for Washington, forcing the Steelers to settle for a 47-yard field goal from Jeff Reed for a 3-0 lead on the road.

Roethlisberger’s completion to Ward for 7 yards was nearly a disaster though as the young gunslinger was late with a pump fake and threw off his front foot targeting Ward outside of the hashmarks where Broncos’ All-Pro corner Champ Bailey nearly jumped for a pick-6.

With a 3-0 lead on the road, the Steelers’ defense stepped up. Following a quick 13-yard strike from Plummer to veteran receiver Rod Smith and a 6-yard rush from Mike Anderson that seemed to kick-start the Broncos’ offense, but it was time for Joey Porter to step up and make a play.

Porter, rushing from the right side of the Steelers’ defense, beat the Broncos’ tight end around the edge and worked his way back to Plummer in the pocket, punching the football out leading to a recovery by nose tackle Casey Hampton, giving the Steelers the football near midfield.

Two plays after the fumble recovery, Roethlisberger hit tight end Heath Miller for 24 yards, eventually setting up Roethlisberger’s beautifully-placed 12-yard strike to Cedrick Wilson in the back-right corner of the end zone, putting the Steelers up 10-0, stunning the Broncos’ faithful.

Underrated on the play was the beautiful footwork Wilson displayed, tapping both feet down in the back corner of the end zone for the score, along with the trademark pump fake from Roethlisberger, getting the cornerback to bite, opening up space for Wilson to operate.

The Steelers’ defense tightened up though, holding the Broncos to a 23-yard field goal from Jason Elam, making it a 10-3 game with 9:27 left in the second quarter.

That’s when things took a turn in the Steelers’ favor in a big way.

Pittsburgh chewed up more than seven minutes of game clock on the ensuing drive, as Roethlisberger found Wilson for gains of 17 and 18 yards, Ward for 21 yards, Randle El for 10 yards, and Verron Haynes for 8 yards, setting up a 3-yard plunge from Jerome Bettis that stretched the lead to 17-3 late in the first half.

It’s quite a site seeing Alan Faneca pulling out of in front of Bettis and fullback Dan Kreider providing a kickout block for a score.

Up 17-3, the Steelers just needed to keep the Broncos out of the end zone to feel good about a two-score halftime lead. Standout cornerback Ike Taylor came through in the clutch though, stepping in front of an errant Plummer throw to the Steelers’ sideline for an interception just two plays after the Bettis score, giving the Steelers the football again with a chance to seemingly put the game away before the half.

The Steelers did just that, surprisingly turning to the ground game late in the first half.

Parker ripped off runs of 10 and 14 yards, putting the Steelers inside the Broncos’ 20-yard line. Two plays later, Roethlisberger kept the play alive, lofting a perfectly-placed ball to Ward in the back of the end zone from 17 yards out for the 24-3 lead that the Steelers would carry into the half.

Coming out of the half, things slowed down a bit as the two teams traded punts. The Broncos figured things out in the middle of the third quarter though as Plummer heated up, finding Smith for gains of nine and 32 yards before then finding Putzier for 9 yards, pushing the Broncos into Steelers’ territory.

One play later, Plummer lofted a shot to receiver Ashley Lelie for a 30-yard score, making it a 24-10 game with 3:43 left in the third quarter.

Pittsburgh answered quickly with a time-chewing drive as Roethlisberger quickly found Wilson for 30 yards on the first play of the drive, before then finding Wilson for another 15 yards and Randle El for 8 yards, eventually setting up a 42-yard field goal from Reed for a 27-10 lead with 13:43 left in the third quarter.

On the next Broncos’ drive, Larry Foote undercut a throw from Plummer for Smith, but the Steelers couldn’t do anything with the turnover as the offense quickly went three-and-out, giving the Broncos the ball right back.

Denver took advantage, marching 85 yards in nine plays before Anderson capped off the drive with a 3-yard rushing touchdown, making it a 27-17 game.

The Steelers looked to put the game away but went three-and-out for the second drive in a row, giving the Broncos life.

Brett Keisel quickly put an end to that though, sacking Plummer on third and fourth down to force a turnover on downs deep in Denver territory.

Five plays later, Roethlisberger dove into the end zone from 4 yards out, capping off the 34-17 win to send the Steelers to the Super Bowl for the first time in a decade.