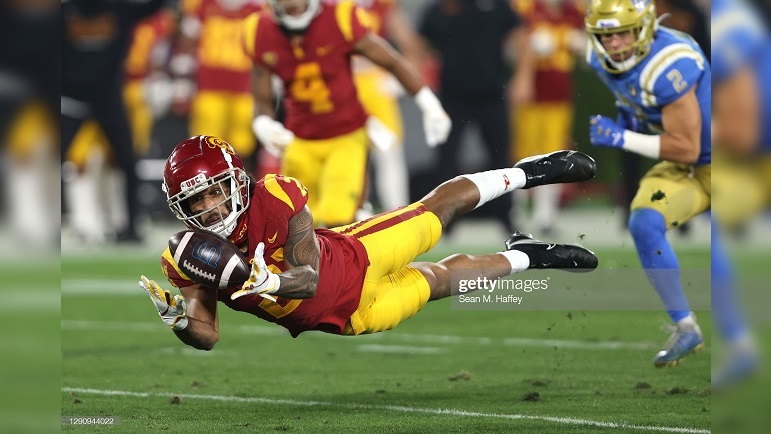 New Summer series for Steelers Depot highlighting a handful of 2022 NFL Draft hopefuls and options for the Pittsburgh Steelers we could be talked a lot more about nine months from now.

-Possesses great length and height for the position

-A natural ballhawk on the backend, led the Pac-12 Conference as a sophomore with four INTs

-Long, slender build doesn’t give confidence to durability at the next level

-History of shoulder injuries are concerning for a defensive back

-His father, Tracey, played football at San Diego State and with the Arena League’s Arizona Rattlers

-Also was on Mountain Pointe’s basketball and track, placing fourth in the long jump in a personal-best 22-7.25 at the 2016 Division I state championship

-Recorded 40 total tackles, five PBUs, and one INT in six games played and started as a junior in 2020

Isaiah Pola-Mao from USC is a long, athletic defensive back that has the versatility and playmaking ability to be considered as one of the top safety prospects in the upcoming 2022 NFL Draft class.  The guy has great genes, having a father who played college and professional football in the arena league as well as a great uncle and uncle who also stared for the Trojans, the latter being so-to-be Hall of Fame inductee Troy Polamalu of the Pittsburgh Steelers. Troy was recognized more as a strong safety whereas Pola-Mao is more of a free safety type, but there are similarities to their game when to pop in the tape. Both players play the game with a reckless abandonment, showing great pursuit of the football whether it be in run support or in pass coverage. For instance, this play highlights Pola-Mao’s instincts and aggressiveness as a run defender, lining up on the right edge of the defense and sniffs out the reverse by the receiver coming into the backfield, being able to sift through the trash and make a play far into the backfield for a big loss on the play.

Pola-Mao is an instinctive defender who does a great job processing what is happening in front of him pre-snap and adjusts before the snap of the football to be in great position to make a play. Watch this clip against Oregon where he rolls down from the box into the slot to come downhill quickly on the WR screen pass, wrapping up the intended target in the backfield for a loss on the play.

Pola-Mao is a willing run defender that has no problem getting up close to the LOS to do the dirty work. He will stick is his in the fan and chase down ball carriers with an urgency you love to see from a defensive back. This play against UCLA shows that effort by Pola-Mao as he lines up on the edge of the LOS and sees #27 Joshua Kelley try and bounce it to the outside. Pola-Mao does a great job taking a good angle of pursuit to the sideline to cut Kelley off, tackling him in the backfield and preventing him from reaching the first down marker.

Now these last few clips have shown Pola-Mao in the slot and on the edge. He is a versatile defender that can line up in a variety of different spots for the defense, but his best spot is as a deep safety in center field or as a split zone safety due to his length and ability to run in the open field. He covers ground se well on the backend, getting to his spot in a hurry to make a play. Take, for example, this rep where Pola-Mao flows to the football on the jet sweep to the left. He comes down from center field to the sideline, taking a good angle of pursuit to the ball carrier and knocks him out of bounds on the big hit, showing off his range to get to the ball as a run defender, closing ground in a hurry to make a play.

This same range on the backend of the defense is showcased in his ability to impact the pass as well, breaking on the ball once he reads the QB’s intentions with the football and gets to the receiver along the boundary in a short amount of time to help out the CB by either breaking up the intended pass or taking it away completely. Here are a couple of clips showing off Pola-Mao’s range in coverage where he gets to the football on-time and picks off the pass.

Even if he doesn’t get there in-time to intercept the pass, Pola-Mao can still impact the pass at the catchpoint from the deep safety position. He comes with nasty intentions as a hitter when he has a free shot over the middle, looking to dislodge ball from man like we see on this big shot against the Ducks.

As highlighted earlier, Pola-Mao has become a good chess piece for the Trojan defense, being able to line up at various spots of the field and make an impact. Here we see Pola-Mao align as a split zone safety but draw the task of manning up the slot receiver on the out route to the sideline. He stays in-phase with the receiver as he breaks out of his route, staying on his back hip and defends the pass well to force the incompletion.

On this play, we see eerily similar traces of instinctive play reminiscent of his uncle who wore the Black and Gold. Pola-Mao lines up detached from the LOS almost in a dime backer role. He reads the option between the QB and RB, keeping his eyes on the QB as he decides to keep the ball and throw it on the RPO. Pola-Mao gets his hands up into the passing lane over the middle on the quick slant look, batting the ball into the air and converts on the diving INT to the ground, getting the big turnover in the opponent’s territory.

Overall, Pola-Mao has a well-rounded game that is easy to like from a pass coverage and run support perspective. He makes plays all over the field from a variety of different positions and is still developing into the playmaker he can be. His best role comes playing as a deep safety where he is allowed to roam the backend and make plays on the football when it is up in the air or use his range to come downhill in run support. His length and size are tantalizing for the safety position, yet he possesses a thin frame that could be susceptible to injury at the next level. He already has two season-ending shoulder surgeries on his ledger early on in his colligate career, which isn’t a good sign for a hard-hitting safety and the prospect of playing a long, durable NFL career.

Still, should he show that these shoulder injuries are a thing of the past and continue to build off of what he has accomplished his last two seasons at USC, Pola-Mao could hear his name called early-on on draft day with the size, length, and play style that is similar to that of current Broncos safety Justin Simmons as a long, rangy playmaker on the backend of the defense who comes in and makes plays. Should Pittsburgh move on from Terrell Edmunds in the offseason, Pola-Mao would be an intriguing payer to pair with Minkah Fitzpatrick with the ability to move either around in the formation, putting one down by the LOS, in the box as a strong safety, or have both deep in split zone/Cover 2 and potentially have the best tandem in that aspect in the league. Time will tell if Pola-Mao can live up to the hype he is getting for being a relative of a Steelers great, but the prospect looks to be a player that will make an impact right away in the league should his previous injury history be in-check.