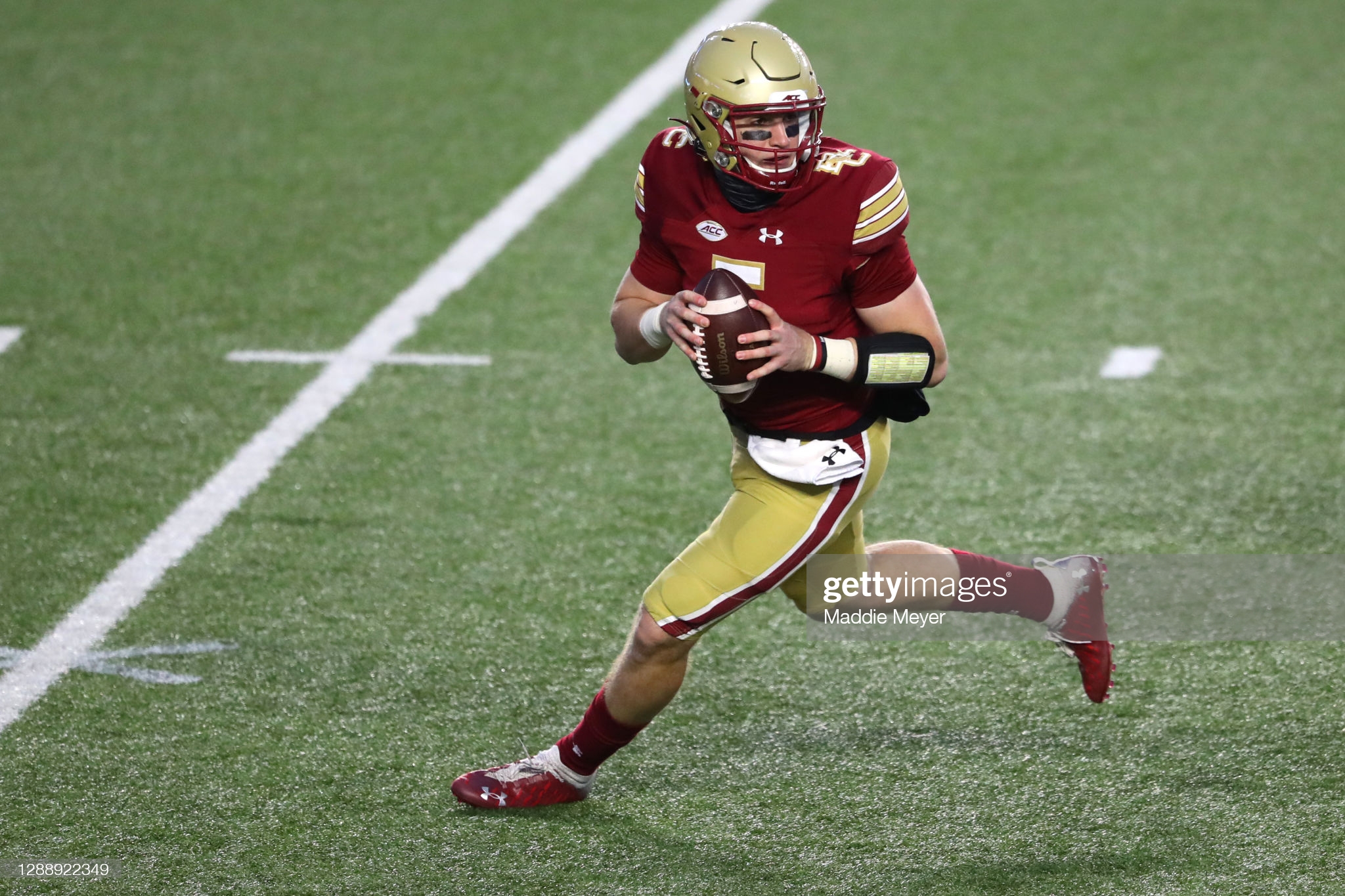 We are wrapping up a summer series for Steelers Depot, highlighting a handful of 2022 NFL Draft hopefuls and options for the Pittsburgh Steelers we could be talked a lot more about nine months from now. No position is linked more to the team than quarterback, with Ben Roethlisberger playing his likely final season. And in the 2022 class, there is one quarterback who has drawn comparisons to Big Ben, and who grew up less than 30 miles from Pittsburgh.

Phil Jurkovec finally got his chance to lead a team at the college level in 2020, after growing up a star just north of Pittsburgh in Pine-Richland High School, leading the Rams to a PIAA state title. After two seasons on the bench at Notre Dame, Jurkovec transferred to Boston College and immediately stepped in as the starter, leading the Eagles to a 6-5 record.

During that run, Jurkovec showed flashes of why his name is getting tossed around as a potential first-round pick. He also showed why his name isn’t constantly one of the names mentioned among potential 2022 franchise quarterbacks, with room to take big steps forward in his second season as a starter.

Start with the good. Jurkovec looks the part of an NFL passer early on plays. Off the snap, he reads coverages well as routes develop, and puts the ball in spots where only his man can make a play on it. His accuracy is something that needs improved in his second season as a starter, but he keeps it out of reach of the defender, and lets his man extend for the ball.

One of his best patterns is the out route, displayed here against Virginia Tech. With time to throw, he drops the pass  in where his man can extend for it, keeping it away from Virginia Tech’s #37 in coverage and floating it over #17 who is defending a shallow route to the same area.

He brings a nice touch to his deep passes, with deceptive throwing power to lay it in the basket and burn opposing DBs. Here are two examples from his game against Pittsburgh. Both plays, he drops it right in to Zay Flowers in stride without forcing him to reduce his speed. Both plays also show how Jurkovec steps up in the pocket well to avoid any pressure off either edge.

Jurkovec is not a true dual-threat QB, but he brings the necessary athleticism to be a threat with his legs. On a broken play here against Notre Dame, he quickly rolls out away from pressure and picks up the first down. He isn’t out-running defensive backs, but Jurkovec has the speed to pull away from linemen and hold off linebackers.

In many ways, Jurkovec brings a fearless trait to how he plays on the field. As a runner, he isn’t afraid to sacrifice the body and take a hit to extend for extra yards or make a bid for the first down. And as a passer, he isn’t afraid to stand up in the pocket and absorb a hit if it means delivering a throw.

Against his former Notre Dame teammates, Jurkovec displays several of his best traits, and shows why he deserves to be considered as a future franchise QB. First, he escapes from pressure as the pocket breaks down. Second, something he does often on extended or broken plays, he finds and quickly signals a receiver downfield to open space. And third, Jurkovec steps up and delivers an accurate throw, despite taking an absolutely punishing shot after releasing the ball.

He is not afraid to take hits on shorter throws, either. Facing UNC and oncoming blitzer Chazz Surratt, Jurkovec stays tall and gets off a short throw despite Surratt coming free with considerable speed, absorbing the hit but delivering an accurate pass.

Watching Jurkovec play at his best, he draws a lofty comparison on certain downs. With his ability to extend plays and the way he shakes off contact, evades sacks, and scrambles with his large frame, Jurkovec looks exactly like a young Ben Roethlisberger. Overall he isn’t at that level yet, but those plays display the upside that has him getting tossed around as a possible first-rounder.

These two plays illustrate Jurkovec at his best. On the first against UNC (two angles), the left tackle misses his assignment on the defensive lineman, allowing him a clear path to blow up the play. Jurkovec quickly identifies the free rusher and evades his man enough to shake off the tackle and remain upright to get away, and buy just enough time to deliver a crossing route to CJ Lewis for a big first down.

The other comes against Virginia Tech and is a clone of Roethlisberger’s early years behind a weaker Steelers O-Line. The BC pocket collapses on both sides early, and allows a delayed blitz from the inside linebacker to come in without opposition. Jurkovec senses trouble, shaking off a grab from the right end and escaping the linebacker to extend the play and deliver an accurate throw down the sideline, again for a first down.

There are downsides to Jurkovec’s game, and areas he must improve to keep his name in first-round discussion. First and foremost is his overall accuracy. He gets the ball to his receivers currently and has no problems on out or most crossing routes. But an inability to consistently hit the numbers does turn some open targets into incompletions, or eliminates the chance for yards after the catch.

This shows up most frequently in low or underthrown passes, which dot his 2020 season. Here is one example against UNC that pops up in any film you watch. Jurkovec delivers the pass accurately, but drops it in too low and forces his target to the turf to make the catch, nearly costing his team a first down. Watching his Pitt, VT, and Notre Dame games, there are similar throws that end up as completions like this, or are just too low for receivers to do anything about.

Jurkovec will also force passes and make questionable decisions with the ball. On most plays, it is just sending a pass into heavy traffic and leading to an incompletion. But in some instances, like the following play against Notre Dame and almost against Pitt (corner didn’t get down in-bounds), it is a costly mistake that leads to an interception. A mistake a QB can’t make frequently and stay in the first-round discussion.

Jurkovec also needs to use his athleticism and running ability more. He is quick to bail on the pocket when needed, but not as aggressive as he should be to take off and gain yards with his legs, instead preferring to wait and wait to try and get a pass off, instead. On this play against Notre Dame, Jurkovec escapes a sack and rolls away from the pocket. He has room to run for the left sideline to make it back to the line and add some extra yards, but instead stops his momentum and lets defenders catch up as he looks for a pass. He gets back to the line, but is fortunate to do so.

The upcoming 2021 college season will be key to whether Phil Jurkovec’s name remains in the first-round discussion, or whether it is one of the ones that disappears as the picture narrows as we get closer to draft season. Coming off his first season as a starter at the collegiate level, Jurkovec showed multiple areas in which he needs to improve to be considered a future NFL starter. But he also showed areas where he possesses intangibles that are clear indicators of a difference-maker at the most important position at the NFL level.

Right now, Jurkovec is a step back of the top tier in the potential 2022 class. A standout season with even a potential Heisman dark horse candidacy could vault him into the top half of the first round, but a season of regression could convince him to remain in school another year entirely.

His style is not a tailor-made fit for every franchise. For the majority of them in the NFL, he is someone who right now is a Day 2 target with franchise upside. But for the Steelers specifically, Jurkovec is a player who is on the first-round radar, based on the team’s almost two decades of experience playing under a similar quarterback in Ben Roethlisberger.

Despite the comparison, this report is not saying Jurkovec is a future Hall of Famer. No report should laud that high a projection on a player. But Roethlisberger’s overall play style is unique, and Jurkovec is a player who replicates it to a considerable degree, moreso than most quarterbacks who have entered the NFL since 2004, the year Roethlisberger was drafted.

There is a lot of work for Jurkovec to do to cement himself as a first-rounder for any team. Right now, there is too much that needs improved upon to earn a first-round grade. But the tools and potential are there, and a lot of that evidence comes on the plays where he evokes comparisons to the Steelers’ long-time QB

Games Watched: (2020) vs. North Carolina, vs. Pittsburgh, at Virginia Tech, vs. Notre Dame