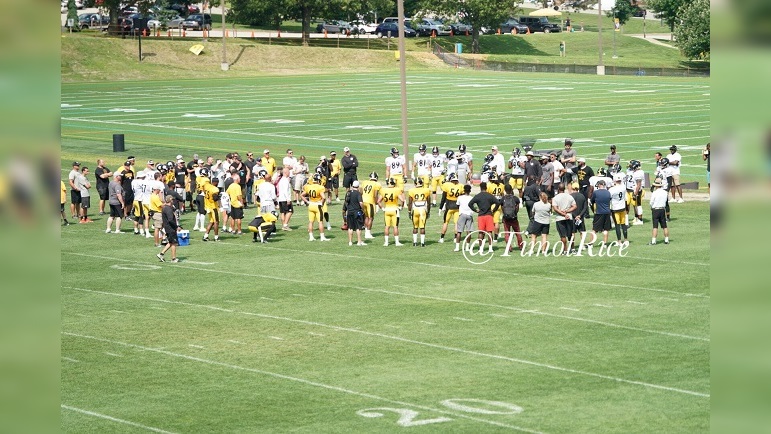 The Pittsburgh Steelers moved their 2021 training camp to Heinz Field on Tuesday, and on Wednesday the team’s practice will be open to the public. That will be a huge deal due to the pandemic wiping out training camp access for fans a year ago. The Steelers’ Wednesday practice will also be the first one in pads for the team this year and head coach Mike Tomlin let it be known on Tuesday that fans can probably look forward to the first backs-on-backers drill of 2021 as well.

“Yeah, we’re going to do what we do and get a chance to get to know them, to sharpen the iron on the iron, just elements of real football,” Tomlin said Tuesday when asked if the team will be doing a lot of the usual popular drills on Wednesday. “They really start to reveal themselves when you get in real football-like conditions, and that’s what tomorrow signifies for us.”

So, that means backs-on-backers, right?

“Yeah. Sure,” Tomlin said when asked to confirm if the popular drill will take place on Wednesday. “You want to do it?”

With Wednesday marking the team’s first padded practice of 2021, Tomlin was asked on Tuesday if he thinks his players are as excited for it.

“They are,” Tomlin said. “They’re competitors. You feel the energy out here. These guys have been playing football all their lives. This is a very normal thing for them. They’re excited about it. They’ve trained for a long time to put themselves in this position. It’s like the first day of school. There is that level of excitement.”

Who will square off against who in backs-on-backers on Wednesday? It’s really hard to know for sure right now. While Tomlin did say in a recent offseason video that he looked forward to pitting inside linebacker Devin Bush versus running back Najee Harris against each other this summer, it still might be too early for the former to participate in such a hitting drill such as backs-on-backers, with him still finishing up the rehab on his surgically repaired knee.

Steelers rookie inside linebacker Buddy Johnson will almost certainly be involved in Wednesday’s backs-on-backers session, and I’m willing to bet running backs Benny Snell Jr. and Kalen Ballage will be as well. In summation, we are set to have a few big collisions during Wednesday’s practice, and our very own Alex Kozora will be present at Heinz Field to observe and report on it what all he sees.