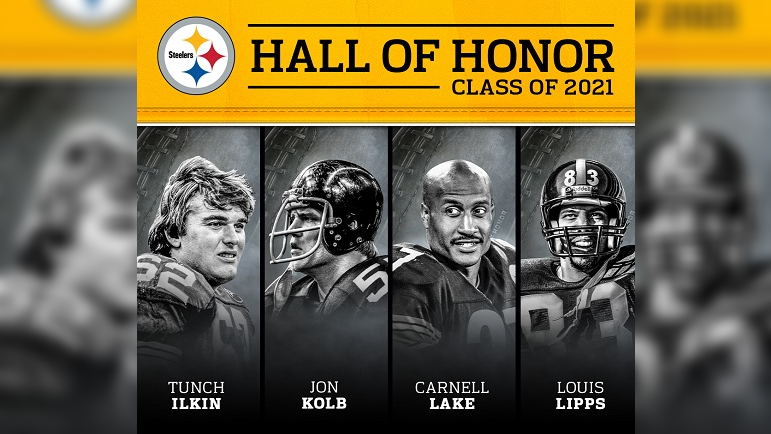 The Pittsburgh Steelers announced the 2021 Hall of Honor class Saturday at Steelers Fest during a live program from the FedEx Great Hall at Heinz Field.

Prior to the four inductees Saturday, the Steelers’ Hall of Honor had 41 contributors honored at Heinz Field.

The Steelers created the franchise’s Hall of Honor in 2017 after Rooney II came up with the idea along with late Chairman Dan Rooney with the goal of recognizing former players, coaches, and front office personnel who played an integral role in the success of the franchise, from the beginning in 1933 to present day.

Kolb, who played for the Steelers from 1969-81, was a key contributor along the offensive line during the Steelers’ dynasty of the 1970s, playing in 177 career games with 138 starts. Kolb, a third-round draft pick out of Oklahoma State in 1969, was named to the Steelers’ 50th Anniversary Team in 1983 as well as the Steelers’ All-Time team.

Lipps, a first-round draft pick in 1984, was named the AP Rookie of the Year coming out of Southern Mississippi in his first year with the Steelers. That season, Lipps earned his first trip to the Pro Bowl after tallying 11 total touchdowns and breaking the NFL’s record for punt return yardage by a rookie. Following a terrific rookie season, Lipps recorded 1,827 all-purpose yards and 15 total touchdowns in 1985.

The dynamic receiver played for the Steelers from 1984-91, finishing his Steelers’ career with 358 catches for 6,018 yards and 39 touchdowns, adding another four rushing touchdowns in his career and three additional punt return touchdowns. Lipps was named Team MVP in 1989 and led the Steelers in receiving yards on six different occasions. His 46 career total touchdowns ranks seventh all-time in franchise history.

Lake was a college linebacker turned safety who also played some cornerback during his time in Pittsburgh. In his 10 seasons in Pittsburgh, Lake recorded 734 tackles, 16 interceptions and 21.5 sacks, earning Pro Bowl nods four times, including two at safety and two at cornerback.

Lake’s best season came in 1997 when he was named First Team All-Pro and even garnered an MVP vote. Lake later returned to Pittsburgh in 2011 as the Steelers’ defensive backs coach, a position he held for seven seasons.