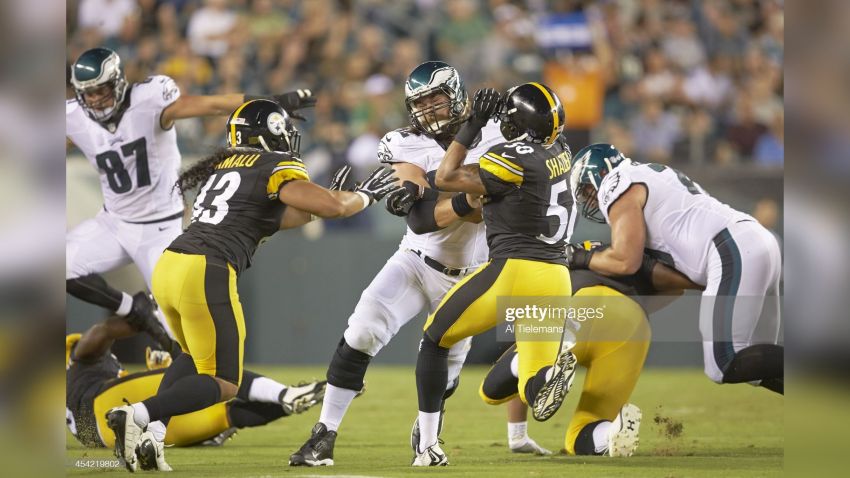 The 2014 season was Troy Polamalu’s last in the NFL before retiring after 12 seasons. It might not have entirely been up to him, though he has since then certainly come to the understanding that the right decision was made at the right time.

Departing then, he got the opportunity to overlap with Ryan Shazier for one season with the Pittsburgh Steelers. Drafted 15th overall in the first round of the 2014 NFL Draft, the Ohio State product was set to become the next great defender. And he was, before a career-ending injury took the game away from him—and him away from the game.

Appearing on WDVE yesterday to promote the Ryan Shazier Fund for Spinal Rehabilitation, the former Steeler briefly talked about Polamalu’s impact on him as a rookie, as the great safety prepares to enter the Pro Football Hall of Fame.

“Troy was just always saying be who you are, and just understand what’s ahead of you”, he told his hosts. “And trust yourself. Troy trusted himself a lot and he watched a lot of film. When you watch film, and you do your homework, you can take a little bit more estimated guesses. Obviously, Troy took a lot of really good ones, and they helped him get into the Hall of Fame. So he said, ‘when you know what you are doing, trust yourself’”.

Polamalu was the 16th overall pick in 2003, spending his entire career in Pittsburgh. Regurgitating stat lines don’t even do justice to what he did on the field, so just this once, I’m not even going to bother. Likely, you all already know exactly who he was on the field.

But he didn’t come out of the box that way, and he made sure to use his own history, particularly his struggles during his rookie season, to illuminate some cold realities for those who came in behind him, including Shazier.

“As a rookie, Troy also let me know that everybody makes mistakes, and everybody’s path is different. He said that when he was a rookie, he got scored on so many times, he should’ve won Offensive Player of the Year”, he said.

“When I heard that, I was like, ‘man’, because Troy is one of the greatest safeties of all time, and his first year in the NFL wasn’t as pretty as he wanted it. But the way he finished his career was probably one of the best ways, one of the best careers you can have”.

Shazier would be an instant starter as a rookie, but injuries often kept him off the field, and eventually led to his demotion. He really started to come into his own in his second season, before ascending to the level of Pro Bowler in his third and fourth seasons.

Sadly, of course, he would suffer a career-ending spinal injury on the field during the 12th game of the 2012 season. Shazier has since gone on to be an inspirational figure, both as an example and as an ambassador for worthy causes.