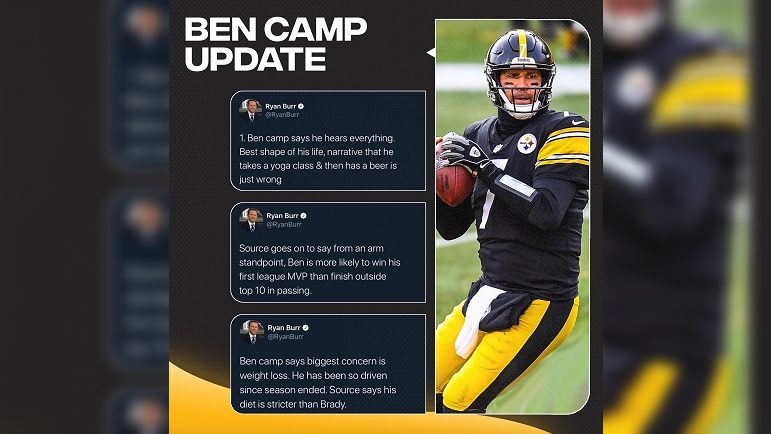 Consider this some offseason fodder, but recent reports around Ben Roethlisberger indicate he’s having “the best offseason of his life.”

In a series of tweets from Ryan Burr, he says Roethlisberger has taken his offseason training very seriously coming off the Steelers’ upset loss in the Wild Card Game to the Browns. Roethlisberger has dropped weight by putting himself on a strict diet, one even more restrictive than Tom Brady’s infamous meal plans.

Bill Belichick denounced Ryan Burr story as fake news. Burr was proved correct then & now details Roethlisberger offseason
1. Ben camp says he hears everything. Best shape of his life, narrative that he takes a yoga class & then has a beer is just wrong https://t.co/2zhVY3Bm4d

Ben camp says biggest concern is weight loss. He has been so driven since season ended. Source says his diet is stricter than Brady. https://t.co/wgmpM7Y9Wu

Source goes on to say from an arm standpoint, Ben is more likely to win his first league MVP than finish outside top 10 in passing. https://t.co/aZnOW9mIfG

Some of those tweets feel meaningless or are impossible to quantify, the arm strength standpoint tweet is especially weirdly worded, but point taken. Burr’s report paints a picture of a Ben Roethlisberger with a definite chip on his shoulder and ready to attack 2021 in what could be his final season. He’s 39 years old and entering the last year of his contract. It’s possible he comes back to play after this season. The most likely scenario right now is that he retires.

Many in the national media have taken shots at Roethlisberger’s work ethic over the years. But all the real reporting, and now this series of tweets, indicates he’s putting in the work to be ready for the season.

Roethlisberger will benefit by being another year removed from his elbow surgery and having a mostly complete offseason to train. The focus this year won’t be on rehab and throwing mechanics. And there won’t be the COVID restrictions that probably hindered personal training and definitely impacted the Steelers’ offseason schedule.

Offseason reports saying Ben is “in the best shape of his life” are predictable at this point. And they should be taken with a grain of salt. But there is reason to believe this offseason will be much kinder to Roethlisberger than last year’s. And hopefully will produce a healthier and more day one ready Big Ben than 2020 did. Roethlisberger played 15 games last season, sitting out the season finale, but wore down as the season went on. His knees in particular were of concern.