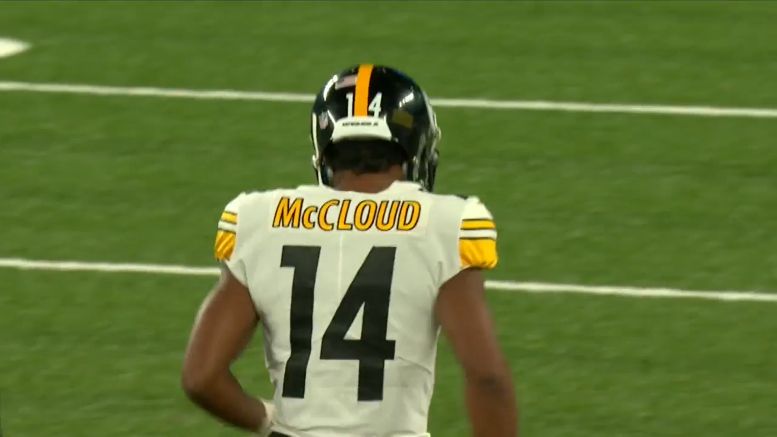 In 2020, we started a new summer series to look at some players that were poised to have a breakout season. This is a look at those players who have been productive to this point in their careers but could be on the verge of busting out and getting more national recognition.  Last year’s list included Terrell Edmunds, Cameron Sutton, Stephon Tuitt and James Washington. This is a breakout candidate for the 2021 season.

Listen to any coach worth his weigh in salt and you’ll hear them mention all three phases of the game.  Offense and defense get all the attention but special teams can have a huge impact over the course of the season.  In recent history, the return game portion of special teams was an area of frustration.

Late in August of 2020, just prior to the season, the Steelers signed Ray-Ray McCloud and he was given a chance to be the guy and in my opinion he exceeded expectations. If that was all he was asked to do, that would fill a valuable role and solidify a position that was a concern in the past. But it begs the question, can he provide more.

Over the past five year the return game has been less than stellar. The list of names is long and frankly uninspiring.  Kick return yardage leaders for the Steelers include Kerrith Whyte, Jr. (264), Ryan Switzer (607), JuJu Smith-Schuster (240), Fitzgerald Toussaint (278) and Dri Archer (354).

The fifth wide receiver spot (based on number of receptions included Deon Cain, Rodgers, Justin Hunter, Demarcus Ayers and Sammie Coates with Rodgers being the most productive with 12 receptions.

There was obviously no consistency year over year.

McCloud’s main role was as a return man and there were questions coming in.  Pittsburgh was his third team in three NFL season and part of the reasoning was ball security. He had 5 fumbles in his first two seasons and started the season off well but had fumbles in weeks 12 and 13.

As a kick return he was solid averaging 23.1 yards and totaling 646 yards. That was most for a Steeler since Chris Rainey’s 1,035 in 2012. McCloud finished 6th in the league in yardage.

As a punt returner he totaled 298 yards and 10.3 yard average.  That yardage led to him finishing 4th in the league. That was the most for Steeler since Brown in 2014 (319). If you’re like me, you had the feeling he was thisclose to breaking one for a score.

As a receiver, if you told me before the season the Steelers fifth WR would have 20 receptions I would have signed up for that right away.  He caught 20 of 22 passes that were thrown his way. That’s a 91% receptions rate. Fantastic. He averaged 5.3 yards after the catch.  I like it. He had four carries for 65 yards.  Wonderful. That’s the good stuff.

The problem was how he was used.  It became all too predictable.  Only four of his targets were to the right side of the field. Only 3 of his targets were more than five yards down the field and the average depth of target was 1.4 yards BEHIND the line of scrimmage. Screen and fly/touch passes were about all he received. Not hard for defenses to decipher.

Test the Deeper Waters – Our Wesley Cantliffe did a deep dive on whether McCloud can become a downfield threat. You can see by his research the McCloud can indeed catch the ball past the line of scrimmage. He can adjust on the run, can track the ball deep and even make catches along the sideline. Being part of a talented group of WR’s will limit his opportunities but if given the 22 targets he got last year and throw it past the line of scrimmage improvement should be fairly easy. It doesn’t have to be deep either.  Just average 5 yards downfield and he should be able to at minimum double his 77 receiving yards even with fewer receptions. The biggest bonus is the defense will have to account for him past the line of scrimmage.

Get Behind the Wall – The blocking by the special teams units has not been strong in recent years but they did show improvement in 2020. There will be some changes in blocking with Spillane doing less if he is starting and departures of guys like Ola Adeniyi and Jordan Dangerfield gone. If they can improve just a touch more McCloud can take advantage. He was strong in breaking tackles last year. The Steelers last punt return touchdown was Johnson in 2019 and last kick return TD was in 2017 by Smith-Schuster. McCloud is ready for his first.

Continue to Take Advantage – The Steelers gave him a chance and he put up his best numbers in just about every category. Last season between offense and special teams he averaged just over five touches per game. A player can only do so much with five touches so he needs to take advantage of those minimal opportunities.  Step one is holding on to the ball. Coaches don’t want to put the ball in slippery hands. Step two is making things happen. He needs to produce more positive plays on offense so Matt Canada wants to get him the ball.  You would think Canada can find ways to get him in advantageous situation and he must capitalize consistently. Step three is score.  Someway, anyway, get in the end zone.

Keep on, keepin’ on.  Finishing in the top six in both return yardage categories was quietly pretty darn good and he hasn’t yet reached his potential.  The new offensive coordinator should be able to give him better opportunities and he must capitalize. The biggest issue for him is ball security.  Get that cleaned up and tack on return score and he could be in the running for a postseason award.

I have a good feeling for Ray-Ray this year.