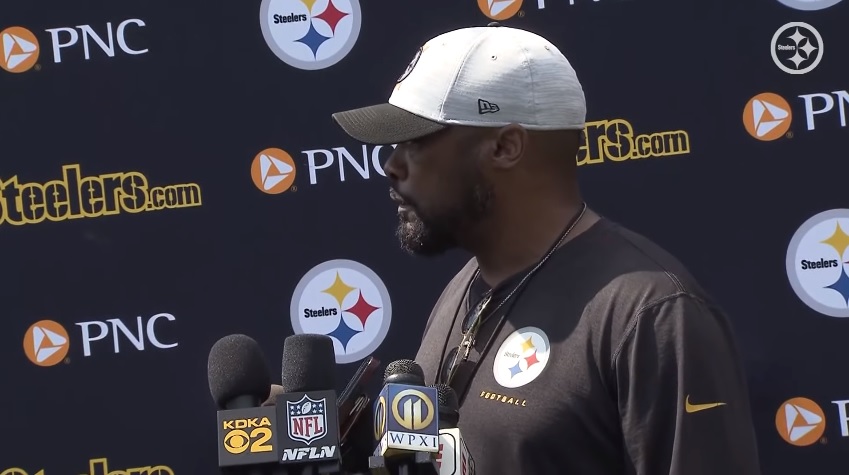 The NFL released a critical memo on Thursday outlining the consequences to teams and unvaccinated players should there be locker room outbreaks similar to what happened last season. For Mike Tomlin and the Pittsburgh Steelers, it’s a memo they won’t have to worry about.

In his first press conference of training camp, Tomlin said the team isn’t worried about the league’s rules and restrictions against COVID.

“We just checked that box,” Tomlin told reporters. “We really kind of moved on to be honest with you. And that’s why we wanted to be so proactive about addressing it. So we’re not spending a whole bunch of time thinking or talking about it. So it’s a non-issue for us, thankfully, due to the efforts and willingness of our guys. So we’re focused on football.”

Though specific numbers aren’t known, the Steelers are believed to be one of the highest-vaccinated teams in the NFL. Several reports say the team has long crossed the 85% mark. For a 90-man roster, that means at least 77 players have received their shots. Many teams have caught up to the Steelers with 78% of players league-wide having been vaccinated.

Updated player vaccination numbers: 78 percent of NFL players have had at least one vaccine dose; 14 teams have more than 85 percent of their players vaccinated; no team is below 50 percent.

Earlier in the day, the NFL made it clear players and teams who do not get vaccinated will face a much more difficult season. If an outbreak is bad enough this year that teams who can’t play a scheduled game within the league’s 18-week schedule will be forced to forfeit and have the game counted as a loss for playoff seeding. If a game is forfeited, no players or coaches from either team will get paid. The memo referred to these situations as “conduct detrimental” to the league. The odds of this happening are low. No such occurrence took place last season, though the Steelers had their schedule disrupted more than any other team through no fault of their own.

But the league is all out of carrots and has reverted to using sticks to convince teams and players to get the vaccine, even if it’s still not required by the league.

In Pittsburgh, players like Cam Heyward have been vocal and at the forefront of encouraging teammates and the Pittsburgh community to get their shots. Still, many players league-wide remain skeptical. That includes Cardinals’ WR DeAndre Hopkins and Bucs’ RB Leonard Fournette (in now deleted tweets) who shared their thoughts hours after the league issued its statement.

DeAndre Hopkins deleted a tweet “questioning [his] future” in the NFL after the league announced any team with a COVID outbreak due to unvaccinated players could result in a forfeit pic.twitter.com/PsOeCWQy4u

Bills’ wide receiver Cole Beasley has been one of the league’s most vocal critics of the vaccine. He’s yet to publicly comment on today’s news.

Though those who have received the vaccine can still test positive for COVID, the turnaround time for them to return to the team is much quicker than those who haven’t gotten their shots. For Pittsburgh this season, that means a low chance of an outbreak or any roster disturbance because of the virus.