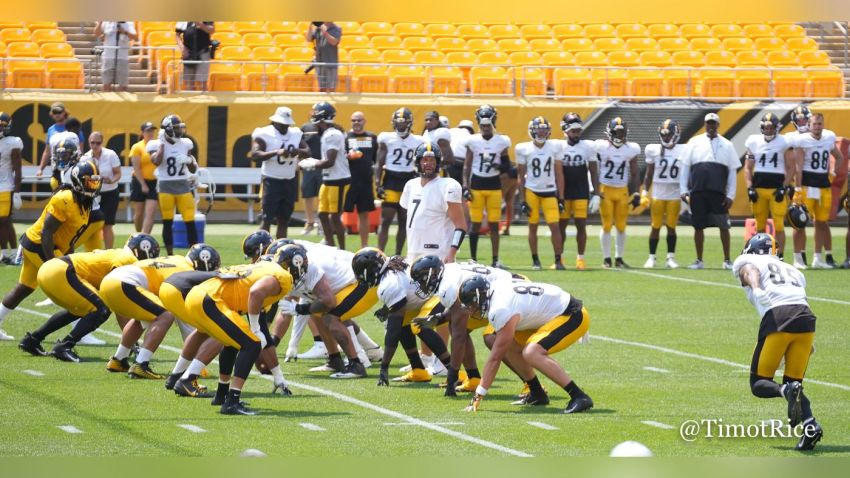 Words and concepts foreign to the Pittsburgh Steelers’ offense for years now. The Steelers have been dead last in playaction over the last five years, 12.3% from 2016-2020. And their motion rate has been among the lowest in football, 23rd last season.

Both those things are likely to change in 2021.

Matt Canada’s college offenses have always been play action-heavy and full of pre-snap motion. In 2018, his Maryland team ranked second in the league in motion. Now, he’s bringing that element to the Steelers’ offense.

I’ll get into some context here in a moment but I charted yesterday’s practice reps to look for two things. How much play action the team used and how many jet plays the team ran (either fakes or gives). Here’s the data. Pittsburgh ran 54 snaps in team sessions yesterday (it technically was 55 but I excluded one botched snap play).

Of those 54 snaps, 29 were passes. And the Steelers ran play action on seven of those snaps. That’s 24.1% of the time, almost double what the offense has done over the past five seasons. Just as importantly, it was effective. Steelers’ quarterbacks complete 6/7 passes for 93 yards on play action. Some of the day’s biggest plays came off it. Dwayne Haskins hit Zach Gentry on a corner route for a long gain while Ben Roethlisberger hit a wide open Pat Freiermuth later in practice off playaction.

They used jet action on 11 snaps. That’s 20.4% percent of the team’s total snaps and that doesn’t include some other motion the team used right before or at the snap. Seven of those jet plays were fakes, four of them were gives/handoffs. It wasn’t always successful but it was clear to see – this offense looks different. Though Matt Canada might not be running everything he’d want to, it’s pretty close to the offense I watched him run at Maryland.

Now the context. Yesterday’s practice was a run-heavy day, often the case for the first one in pads. That lends itself to being under center more and using play action when you do decide to pass, something that’s been common in camp in past years. But I don’t think quite to this degree, especially with the install of boots and rolls off jets and general misdirection.

So how much playaction we’ll see from the Steelers’ offense remains to be seen. Probably a little less than nearly 25% like yesterday’s practice. But we’re going to see an uptick and Pittsburgh will likely be out of the basement in that category like they have been virtually every other year in recent history. Ditto with motion, which will absolutely be increased in this offense. It may not be second-highest the way it was for Canada’s Terps team, but I’d be surprised if they weren’t at least in the top ten.