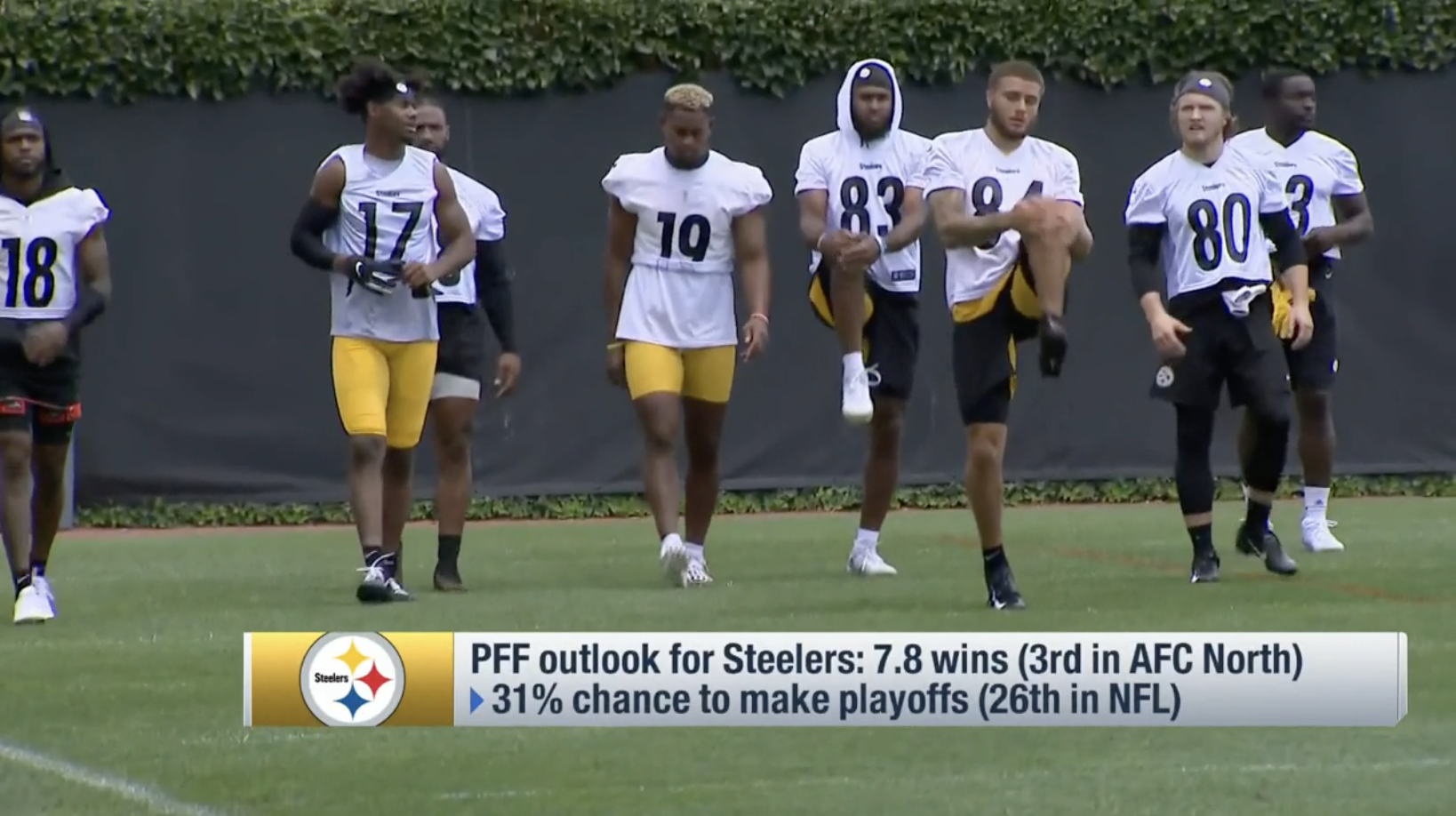 With the Pittsburgh Steelers’ preseason debut against the Dallas Cowboys on August 5 in the Pro Football Hall of Fame Game just around the corner, Pro Football Focus Chief Experience Officer George Chahrouri appeared on NFL Network’s Total Access to discuss the projected win totals for both the Steelers and Cowboys, now that both teams are in training camp.

Though Chahrouri is rather high on the Cowboys overall this season, he was less than excited about the Steelers’ chances in 2021, projecting the Steelers to win 7.8 games this season, giving the black and gold a 31% chance to make the playoffs in a tough AFC.

“Yeah, I’m not very popular in Pittsburgh, Patrick, because when they were 10 and oh, I said they were overrated and they didn’t play so well down the stretch,” Chahrouri said. “So I feel a little vindicated, but one of the reasons for that, Patrick, is we just did not see the Big Ben of old last year. He just did not have his normal downfield aggressiveness, his average depth of throw dropped nearly two yards. He was throwing the ball way shorter and his PFF grades suffered. He finished just 24th among quarterbacks in PFF’s grade. So for them to overcome their projection, which right now is third in that division, it’s going to come down to Big Ben getting back. Some of that mojo he had in the past and always looking lean and mean, the beard is a little trimmer. We’ll see if that actually manifests itself on the field for the Steelers. Cause their defense might be able to pick them up enough, but not quite get them all the way to the playoffs unless he puts it together.”

Once again, Pro Football Focus completely ignores other major stats and instead looks at its own metrics to knock Roethlisberger, pushing a false narrative that Roethlisberger wasn’t as aggressive last season.

The fact of the matter is Roethlisberger attempted the third-most attempts 20+ yards downfield, which says he had no problem being aggressive. Where he needs to improve is in the downfield accuracy, giving his receivers more opportunities to win downfield. He doesn’t need to throw downfield more, he just needs to be more accurate.

This shouldn’t be that hard, but it is Pro Football Focus we’re talking about.

The Steelers don’t need to have the Big Ben of old to win in this division in 2021. The Steelers need to the run game to have drastic improvements, and a new offensive line to gel quickly, rather than hoping a 39-year-old quarterback can turn the clock way back and light it up again.

It’s the same discussion we’ve been having here at Steelers Depot all offseason, yet Pro Football Focus can’t seem to comprehend the issue, instead pushing an incorrect narrative over and over and over again.