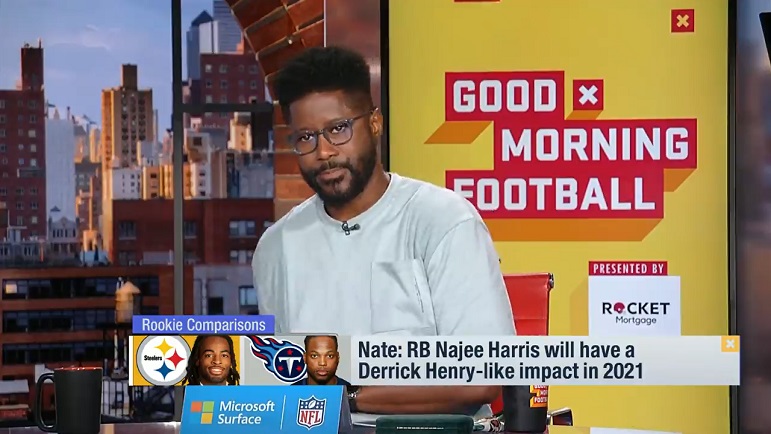 The crew on ‘Good Morning Football’ attempted to identity comparison impacts that select rookie around the NFL will potentially make in 2021 on the NFL Network Monday morning. Basically, each person on the show was asked to name one NFL rookie and then project the impact that player will have compared to a current and established NFL player. For Nate Burleson, he chose Pittsburgh Steelers rookie running back Najee Harris and he compared him to another former Alabama running back.

“For me, I’m going with Najee Harris,” Burleson said. “He’s going to have a Derrick Henry-like impact on the Pittsburgh Steelers.”

Burleson went on to say why he believes that Harris, the Steelers first round selection this year out of Alabama, can have an impact like Tennessee Titans running back Derrick Henry in 2021 as a rookie.

“I’m just a big fan of this guy,” Burleson said of Henry. “And I felt like he was overlooked, even though he was dominant, dominant in college. And I try to convince people who want to argue, ‘Well, he was playing as a bigger back in college. It’s not college anymore.’ He was at Alabama. He was playing against the best of the best. When you’re a grown man in Alabama, and you’re making other college players, who are also league individuals, look like high schoolers, you’re going to do the same thing once you get into the league.”

Burleson went on to say that another reason Harris will have a Henry-type impact as a rookie is because the Steelers offense absolutely depends on him doing just that to have success in 2021.

“And more importantly, they need him,” Burleson said of the Steelers and Harris. “They need him more than anything. Rushes per game, yards per rush, rush TDs; the Steelers were at the bottom of the pack in all of those statistical categories, and they need a guy that you can just turn around, hand the ball off to and let him do his thing. They have the playmakers; they have the wide receivers. We know that Big Ben [Ben Roethlisberger] is going to try to get the ball out of his hand, because he doesn’t want to move around the pocket too much or use his legs. But when they start to kind of fold in on those intermediate passes, you need to run game to lean on. Because we saw at the end of the year when teams kind of figured out the Pittsburgh Steelers game plan, and we’re like, ‘Oh, Big Ben just wants to get the ball out fast.’ They didn’t have a running back that they could lean on game in and game out. Najee Harris is going to be that guy.”

Burleson isn’t really wrong. The Steelers indeed do need Harris to have a Henry-type impact in 2021. They need him to touch the football at least 300 times and have a success rate of 50 percent or greater. If that doesn’t happen in 2021, it’s hard to imagine the Steelers offense being competitive on a weekly basis.

Several total rushing yards betting over/under lines on Harris are right under 1,000 yards as the Steelers gets ready to open their 2021 training camp. Harris absolutely needs to shatter 1,000 yards rushing as a rookie if the Steelers are going to win nine or more games in 2021.

Will he ultimately have a 2021 season that will rival the one that Henry will have? We’ll see. It’s certainly possible if he stays healthy.