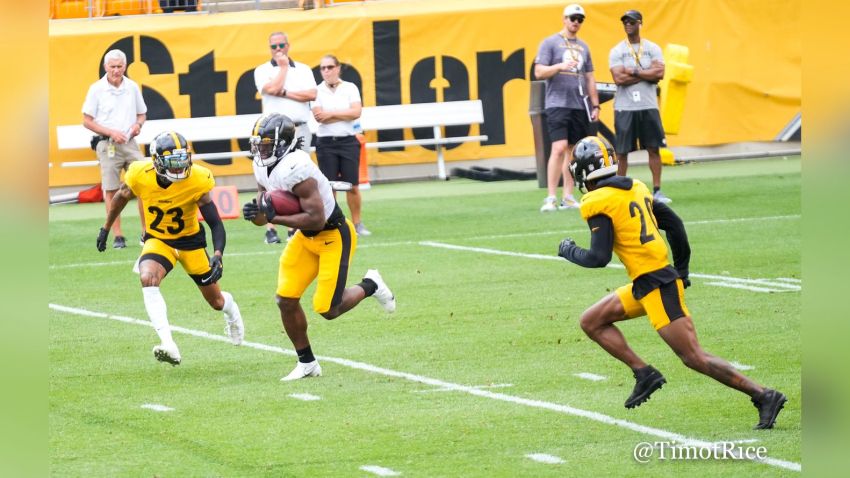 When you finish 32nd in the NFL in rushing offense, the only direction you can go is up, but the Pittsburgh Steelers’ dramatic remaking of the offensive line, much of which was not through their own making, is not going to help matters.

As much as it irks the analytics folks, the Steelers really are relying a lot upon the individual efforts of their first-round pick, Najee Harris, to account for quite a bit of the improvement of the running game in comparison to recent years. And to listen to him talk, he knows this without even being told, telling reporters today after practice, “it’s my job to create”.

“We’re playing good on good. This is the NFL, so not every run is gonna be blocked perfectly”, he said during a fairly lengthy, informative, and amusing first session with the media for him in training camp. “My job is to make the most out of every run”. He gave an example of a play during that days’ practice in which second-round tight end Pat Freiermuth failed to hold his block.

This is exactly what Steelers fans need to hear after the offense as a whole averaged just 3.6 yards per rush in 2020. Only James Conner managed at least two yards after contact per attempt on the season. He also totaled 17 broken tackles, according to Pro Football Reference. But now he’s in Arizona, and it’s Harris’ job to make those extra-effort plays.

“That’s what I’ve got to do, because like I said, not every play’s gonna be blocked, and I know that”, the rookie said. “I think what separates the running backs from a good one and an amateur one is, when the play’s not blocked for what it is, what can he create? That’s what I try to do. I try to create as much as I can when the play is not blocked”.

Last season, Aaron Jones of the Green Bay Packers led the league among players with at least 200 carries with 2.9 yards after contact per rush. Derrick Henry, who rushed for more than 2,000 yards in total, recorded more than half of his yardage after contact, 2.8 per carry.

That’s the sort of playmaker the Steelers need in the backfield in order to compensate for what will at least be growing pains from a very new offensive line, including essentially four first-time starters, among them a rookie, and a veteran who is new to the team. Never mind the fact that they haven’t even practiced together yet.