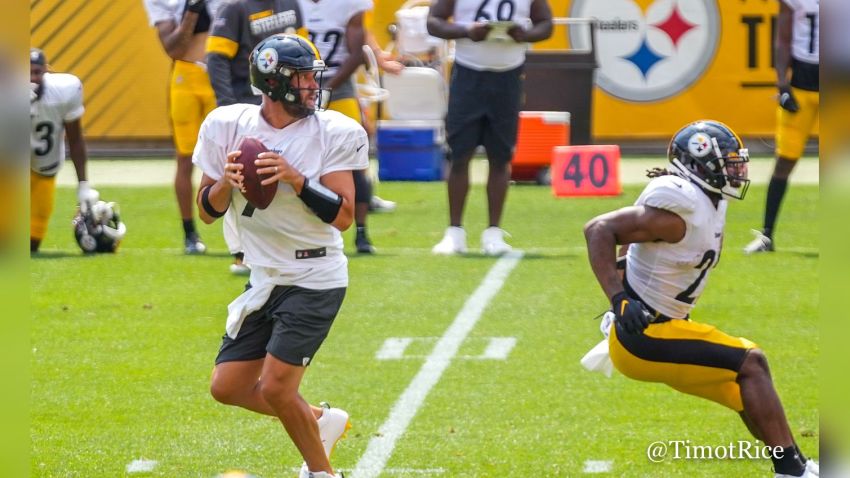 One of head coach Mike Tomlin’s favorite aspects of being a coach, it seems, is baptizing his new players. Particularly when it comes to new running backs and pitting them in the backs-on-backers blitz pickup drill.

The Pittsburgh Steelers held their second backs-on-backers drill in the past three days during their Friday Night Lights practice earlier this evening. This time, he ramped up the challenge for first-round running back Najee Harris, and the results reflected that, but his coach remained high on what he showed.

“I just liked the competitive spirit of 22 again”, he told reporters after practice. “And he lost some today, because he was going against bigger men—we pit backs on inside linebackers, that outside linebackers are almost somewhat D-end-like—so some of those matchups get a little bit challenging. We put Alex Highsmith on him today”.

In the first session, Harris was primarily working against inside linebackers like Marcus Allen, for example. He got more edge rushers in this session, like Highsmith and Jamir Jones. His results reflected that, but not his demeanor.

“He just has an appetite for competition”, Tomlin said of his new featured ball carrier. “He has a long way to go from a growth standpoint in terms of techniques and stuff, but I like his appetite for the competition”.

It shouldn’t be a surprise, of course, for a rookie to come in lacking polish in pass protection. It’s not exactly a stable of their job resume at the college level, for one thing, especially if they’re a star leading back like Harris.

Harris will learn all of that. He’s learning it now. And he certainly has the size to hold up. As Tomlin suggested, he’s not going to be going up against edge defenders for the most part. Generally, he’s going to be taking on interior blitzers.

And the backs-on-backers drill is always skewed heavily to the rusher. If Highsmith was losing to Harris, that would be a lot more concerning than the other way around, to be quite frank. But what you want to see there, especially at this juncture, is that competitive drive. That is certainly what we’re getting.