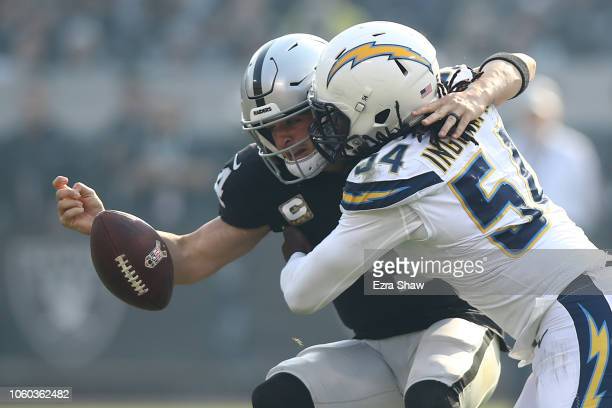 The Pittsburgh Steelers’ reputation as a team that doesn’t dip into outside free agency is so-well cemented that it’s almost hard for experienced fans, who’ve been through the ringer, to get very excited when you hear news about such-and-such player being brought in for a visit. We’ve seen enough of those visits where nothing comes of it.

With a little bit of money to burn following the surprising developments that led to David DeCastro being waived, however, the Steelers were able to add experienced help at outside linebacker, bringing in former Pro Bowler Melvin Ingram on a one-year contract, worth $4 million, according to reports.

So why did he choose the Steelers? Well, money talks as always, I’m sure. Ingram did have interest from other teams, including the Miami Dolphins, but we have no idea what kind of money may have been discussed. But he also told Josina Anderson that it was head coach Mike Tomlin that helped sell him on the black and gold.

“I met with coach Tomlin”, she quoted him as saying after speaking to him over the phone after signing. “You can tell he’s very involved & a players’ coach. That’s what stood out to me. He wants to win and that is what I am on. My role is my role. He just told me to come in and be me. Everyone knows how I play”.

Melvin Ingram on the phone [Cont]: “I met with coach (Mike) Tomlin. You can tell he’s very involved & a players’ coach. That’s what stood out to me. He wants to win and that is what I am on. My role is my role. He just told me to come in and be me. Everyone knows how I play.” 2/2

A first-round pick, 18th overall, by the San Diego Chargers in 2012, Ingram has had issues staying healthy over the course of his career, but has always been an effective and well-rounded player, which helped him reach the Pro Bowl three times.

At the least, Ingram will be expected to play a meaningful rotational role on the defense, but we really can’t rule out the possibility of him starting, either initially or eventually. It may be that they give Alex Highsmith the opportunity to earn the starting role, but perhaps, after this signing, it won’t be handed to him.

This was a much-needed addition to a room that lost Bud Dupree and Olasunkanmi Adeniyi in free agency. Dupree himself is much like Ingram as a player, so the veteran feels like a logical replacement, whether that’s as a rotational piece or as a starter.

One thing is clear, though, and that’s that, even 15 years into the job, Tomlin still has a way of attracting people to his cause. Not every player talks glowingly of their head coach or about how the man running the show was the reason they signed with a team.