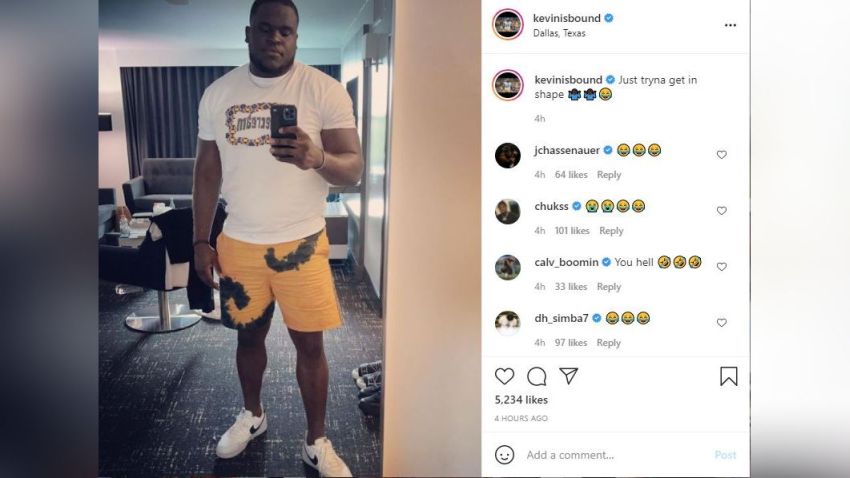 Kevin Dotson hasn’t gotten himself where he is now without a lot of hard work. He hasn’t been overly advantaged, outside of his natural physical gifts, throughout the course of his path to the NFL. He wasn’t even invited to the Combine. So nobody should be surprised if he takes it to heart when his work ethic is called into question.

As you no doubt know by now, a local beat writer has beaten the drum a couple of times in the past week that he has been told by an ‘impeccable’ source that the Pittsburgh Steelers were unhappy with Dotson’s effort this offseason, with the initial report specifically citing concerns about his conditioning.

His story didn’t really blow up until earlier this week, however, when he put it in a podcast, which is when it got back to Dotson—and his personal trainer, Duke Manywheather, who came to his defense. For his own part, he didn’t offer much initially, simply saying that those he trains with knows the work he puts in. He also confirmed that he hasn’t heard these things from coaches.

Dotson decided to have a bit of fun last night, though. He posted a selfie to social media showing himself in a full-length mirror, clearly looking like he is in great shape for an offensive lineman. “Just tryna get in shape”, he captioned it, with a string of appropriate emojis, poking fun at the story.

A fourth-round pick out of Louisiana-Lafayette, Dotson was forced into early action in his career, even though he didn’t have the benefit of a proper offseason due to the pandemic, which eliminated the preseason altogether.

He ultimately started four games last year, logging about 350 total offensive snaps, and his play was almost universally lauded as being above the line. His play in pass protection was particularly noted, and Pro Football Focus has been high on him.

With the offensive line in the midst of a major overhaul—gone are Maurkice Pouncey, David DeCastro, Matt Feiler, and Alejandro Villanueva—Dotson is perhaps the closest thing the team has right now to a ‘sure thing’, which is saying a lot about how little they have in terms of proven commodities.

That’s why many were quick to grab onto the report and decry that the sky is falling, because if the Steelers can’t even count on Dotson, then the offensive line is doomed to fail. The projected center is a rookie. The right tackle has one start, the left tackle with no experience on that side. The replacement for DeCastro is a banged-up veteran who hasn’t played a full season in a long time.

Yet since the report did the rounds, there has been no corroborating evidence. Multiple beat writers have said on air that they have heard nothing similar. Dotson himself has said he’s never heard it from his coaches. And there is ample evidence of his working out throughout various portions of the offseason.