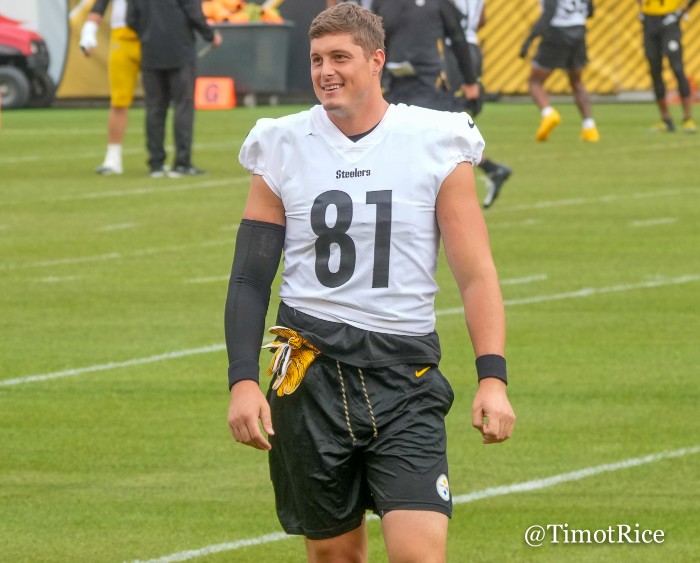 In 2020, the Steelers primarily ran with two tight ends on game day, Eric Ebron and Vance McDonald. The latter has retired and while he wasn’t a big part of the offensive passing game he left a need for a blocking tight end. He had 15 receptions on 20 targets for just 99 yards.

Ebron in his first season as a Steeler performed well overall.  He finished fourth overall on the team in targets (91), receptions (56), yards (558) and touchdowns (5), and gave the offense a pass catching tight end which was a position of need. He did have seven drops and 1 lost fumble, but will fill a similar role in this year’s offense.

Pat Freiermuth was added in the second round and the hope is he can become an all-around player who can block inline as well as be split out. At Penn State, in three seasons he had 92 receptions, 1,185 yards and 16 touchdowns.

Ebron and Freiermuth will be on the roster but who will fill the third spot.

Zach Gentry – He is entering his third year in the league and has yet to make his mark. The former quarterback turned tight end only had two collegiate years at the position before getting drafted in 2019. Early reports from training camp say he looks to have added some muscle to his 6’8” frame. He has also been making some plays as receiver.  If he can improve his blocking he’ll have a much better chance of making the team. To this point he has been active for just 6 games totaling 69 offensive snaps, 13 special team snaps and one reception for 4 yards.

On the positive side, he is still just 24 years old and is making strides physically. In college, he showed he could be a receiving threat averaging 16.7 yards per reception. He has better size and wingspan than the other candidates and could be an end zone threat.

On the negative side, he was a project coming in and so far has not shown enough to get him on the field consistently. He is already being passed by a rookie.  Blocking is what he must be able to do and that has been a struggle for him so far. He has been unable to earn a chance on special teams.

Kevin Rader – He was originally signed by Green Bay after the 2018 draft but was cut. He signed with Pittsburgh in 2019 and had bounced on and off the practice squad over the past two seasons before getting his first action last year. Rader is a solid blocking tight end and made the most of his special team opportunity last season. He was on the roster for 4 games and active for one and received one target with 12 snaps each on offense and special teams.

On the positive side, he is the best blocker out of these three candidates and that may be what is needed on the roster. He showed very good aggressiveness on special teams getting in on 3 tackles in his lone game. He is willing to do the dirty work.

On the negative side, he is the least athletic of the three and not a receiving threat. Despite being a solid blocker, he was keep off the roster most of the season.  If he makes the active roster can he do enough to get a helmet on game day or will they continue to use a tackle as the third TE?

Dax Raymond – Has had stops with three teams since signing as a UDFA with the Chicago Bears. Raymond was a solid receiving tight end in college at Utah State and even got a Senior Bowl invite. He had 72 receptions, 873 yards and three touchdowns. He has been unable to stick with any team very long and has some injury issues along the way. Yet to see the field or be on an active roster for an NFL game.

On the positive side, he is a good athlete and is the fastest of the bunch. He fits best as a flex tight end and show showed solid hands in college.  He has a solid release, is an adequate route runner and can get yards after the catch.

On the negative side, he can’t find his way to an active roster.  Some of that has to do with injuries but can crack the 53. Three teams in 2 years. A liability as an inline blocker and hasn’t shown enough as a receiver. He is the oldest of the bunch turning 27 in November.