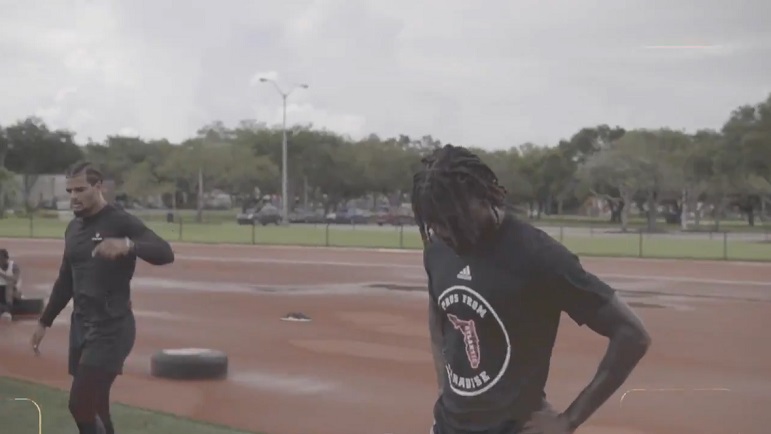 The 2021 NFL season is set up to potentially be a big one for Pittsburgh Steelers second year cornerback James Pierre and especially on the heels of the Florida Atlantic product reportedly have a strong set of practices during the offseason sessions. Pierre is now hard at work putting the finishing touches on his offseason training and according to his latest social media postings, he has an established member of the teams secondary working with him.

On Thursday, Pierre posted a video of himself training with fellow teammate and fellow Steelers secondary member, safety Minkah Fitzpatrick. This, however, wasn’t the first time that the young cornerback has been spotted working with Fitzpatrick at Florida Atlantic this offseason and that’s great news.

Pierre was on the Steelers 53-man roster all last season and that was quite an accomplishment for the then-rookie undrafted free agent with teams not having OTAs, minicamp and preseason games in 2020 due to the COVID-19 pandemic.

Pierre went on to seemingly surpass fellow young Steelers cornerback Justin Layne on the team’s depth chart late last season and he even played well in the limited defensive snaps he played to close out the 2020 schedule.

“He’s one of those second-year guys that we all have high expectations for,” Steelers head coach Mike Tomlin said of Pierre during the team’s minicamp. I think it’s reasonable when you’ve been around a guy that’s been in the program and kind of understands what to expect, what’s needed of him physically, what’s needed of him mentally, and so forth. I think we’re looking for all of those second-year players to gain experience. That guy gained a lot of experience last year. He didn’t play a lot of defense, but he had a helmet every week, he was preparing every week. He was a critical component of our special teams unit and that is usually an indication that a guy is ready to proceed and advance, and I think it’s reasonable to expect him to do so.”

Pierre is one of the leading candidates to ascend into a more prominent role with the Steelers in 2020 after the team lost cornerbacks Steven Nelson and Mike Hilton, two of their top three cornerbacks, during the offseason. Cornerback Cameron Sutton will take over one position, likely on the outside, but the team is still looking to find which young cornerback will be on the field in nickel sub package situations.

Should Pierre prove to be the Steelers best for the fifth defensive back role, he will presumably play on the outside when the defense uses their nickel or dime packages, with Sutton sliding down into the slot position. Among the other options are for that role are Layne, Arthur Maulet, Tre Norwood, and Shakur Brown.

As the offseason winds down and training camp gets closer, it’s great to see Pierre working on his craft alongside an All-Pro such as Fitzpatrick. That certainly won’t hurt the young cornerback’s development.