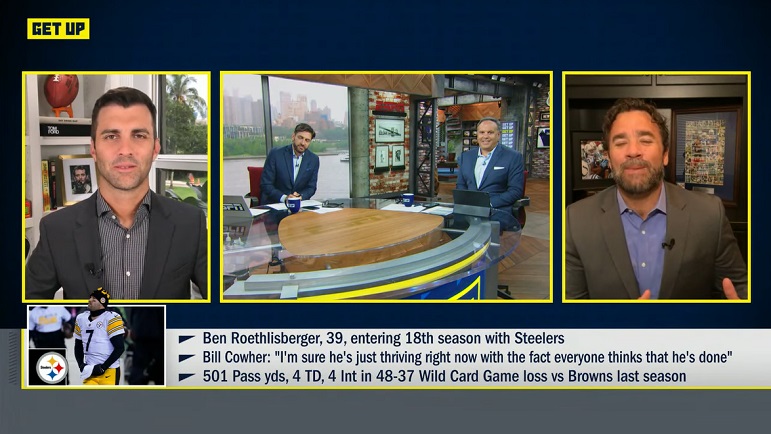 Are you ready for your weekly dose of former NFL executive Mike Tannenbaum banging on the Pittsburgh Steelers and veteran quarterback Ben Roethlisberger? If not, perhaps you will enjoy learning what fellow ESPN analysts Jeff Saturday and Jeff Darlington both thought about Tannenbaum’s latest dump on the Steelers.

First, let’s start with what all Tannenbaum said about Roethlisberger and the Steelers earlier this week on ESPN’S Get Up! show.

“He’s [Roethlisberger’s] missing three offensive linemen and I know Jeff Saturday is going to agree with me, when you lose [Alejandro] Villanueva, [Maurkice] Pouncey, and now [David] DeCastro and you were 30th in the NFL last year in yards per pass attempt, it’s going to be that much harder for him to be successful,” Tannenbaum said. “So, I apologize, Heather Dinich [Senior writer for ESPN and a Steelers fan], I’ve been better for about 15 minutes, so they’re going to stink. And then next year they’re going to be worse because they’re going to have three other quarterbacks in their division that are going to get better, and they don’t have a quarterback of their future. And they are making a Cardinal sin of they are paying a quarterback for what he’s done, not what he’s going to do. So, all the respect in the world for Bill Cowher, but in my opinion, it’s over for Ben Roethlisberger and losing three offensive linemen makes it worse.”

“I agree about the offensive lineman for Mike T [Tannenbaum], that’s about all of them agree,” Saturday said. “I can’t bet against [Mike] Tomlin. I mean, listen, this guy finds ways. I mean, he went 8-8 with guys that played worst quarterback than I could play. So, I think Roethlisberger, they will find ways. They were 11-0 last year at one point. I get they fell off the rails, came off the rails late in the season, but when you look at this football team, I still think Roethlisberger produced with what was being asked of him. I think the offense make some tweaks and changes. I think they run the ball better and more consistently. So, I disagree with Mike T [Tannenbaum] on the way that the team is going to go. I think Tomlin does a nice job of rallying his team, us versus the world, he’s bringing those guys in with that defense. They’re still going to be somebody to mess with and their division and in the playoffs.”

Darlington also thinks the Steelers will be better than Tannenbaum believes they will be in 2021 and especially now that running back Najee Harris was added in the first round of the 2021 NFL Draft. Darlington has been a fan of Harris and the Steelers selecting him for quite some time.

“I think that his [Harris] impact can really loom largely over the potential success here,” Darlington said. “I also, it’s funny when you hear Jeff Saturday talk about when they [the Steelers] started the season 11-0 last year. Like, I never really trusted that 11-0, either, but now we’re acting like they started 0-11. Like, the pendulum has swung so far with the Steelers. And I’m not saying I completely disagree with Tannenbaum, I understand some of the deficiencies here, it’s just like all of a sudden, I mean, this, what was it November that they were still like, had that undefeated record? And a month and a half later, the season’s over and we’re acting like the Steelers are just awful? I just, I’m not there yet. I can’t. Maybe I’m just seeing smoke and mirrors, I just can’t get there yet.”

Darlington does have a point. While an argument can be made that the 2020 Steelers were one of the worst 11-0 teams in the NFL ever, they were still 11-0, nonetheless. On the surface, the 2021 Steelers seem to be mostly ranked and evaluated based on the last six games they played in 2020 after starting 11-0.

Personally, I think there is too much talk this offseason about how Roethlisberger will or won’t play in 2021 and how he might be the third or fourth best quarterback in the AFC North. I think most of the focus heading into the 2021 season should be on the Steelers offensive line and their running game and then on the team’s defense. If the Steelers can’t run the football and play good defense in 2021, I really don’t think it will ultimately matter how good or how bad Roethlisberger ultimately plays. To me, Roethlisberger is not the biggest X-factor when it comes to the 2021 Steelers. Instead, he’s like the third biggest X-factor.