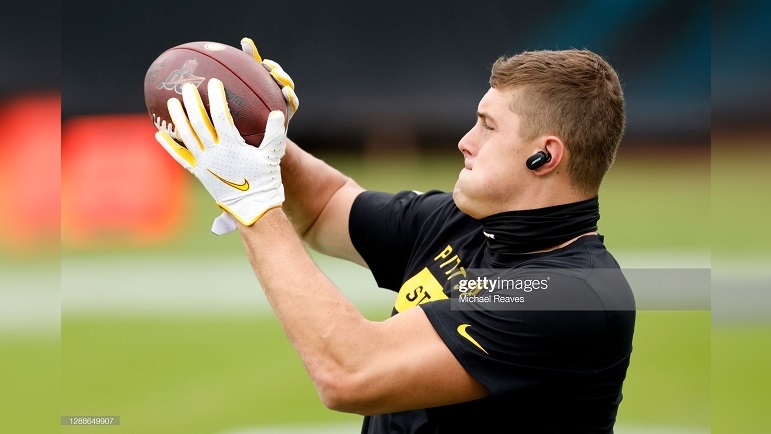 This year’s training camp is a big one for Pittsburgh Steelers tight end Zach Gentry as the former fifth-round draft pick out of Michigan isn’t a lock to make the 53-man roster later this summer on the heels of the team spending their second-round draft pick on tight end Pat Freiermuth. Gentry, who had his 2020 season cut short by a knee injury after playing just 20 offensive snaps in the team’s first 10 games, seems to be having a good start to his third training camp, according to what fellow Steelers tight end Eric Ebron said after Tuesday’s practice.

“Gentry’s phenomenal,” Ebron said of the former college quarterback-turned-tight end. “Just from watching him as he came out of Michigan to now, being with him two years, his development, his flexibility, his knowledge of the game is improving. And he’s starting to understand that he’s 6-12, and not a lot of people are 6-12. It’s seven feet, I get it. But he has to understand, you know, his body is abnormal compared to other tight ends and other people, and he has to be able to use that to his advantage. And he’s doing a really good job at understanding that this year.”

Ebron was then asked if that means Gentry needs to do a better job with leverage and positioning.

“You know, that’s him understanding, and that’s more with an attitude,” Ebron said. “You know, you play this game, and you just assume that everybody is, you know, what their resume speaks of or whatever. And I’ve just felt like his attitude and the way he’s approaching everything is a lot better. And that’s how it starts.”

While Ebron paints an incredibly positive picture when it comes to the 6’8″ Gentry at the start of his third training camp, attitude isn’t going to be enough to ensure he makes the Week 1 53-man roster later this summer. Gentry is going to need show this year during training camp and the team’s preseason schedule that he can block effectively, something he’s failed to do in his first two NFL seasons and 69 total offensive snaps played.

Gentry’s also going to need to start excelling more on special teams this summer if he’s going to make the 53-man roster later this summer as the team’s third tight end behind Ebron on Freiermuth. Battling Gentry this year in training camp are tight ends Kevin Rader and Dax Raymond. In fact, Rader is probably the odds-on favorite to win that third tight end spot at the start of training camp.

Ending this post with the focus on Gentry, expect him to play quite a bit throughout the preseason. That includes the team’s preseason opener a week from Thursday against the Dallas Cowboys. Assuming Gentry does play in that Hall of Fame game contest, you can count on him being asked to block quite a bit. Hopefully he’ll start using that 6’8″ body of his to his advantage more than he has so far to date.