Today I am starting my “Tight End Study Series”, similar to my “Quarterback, Running Back, and Wide Receiver Study Series”. With more time this offseason, I wanted to dive deeper into some questions I usually don’t have time for. One of these questions revolved around Tight Ends in the passing game. Here are the datapoints that I wanted to learn from in this study:

Before the graph comes up, this is important! The chart below is viewing EPA, Success, and pass plays only, so this is a simple starting view. Another goal of this study was to start with the elements I thought added the most value to the team in the receiving game (adding points and success in the pass game along with usage). With that in mind, here’s what 2020 looked like: 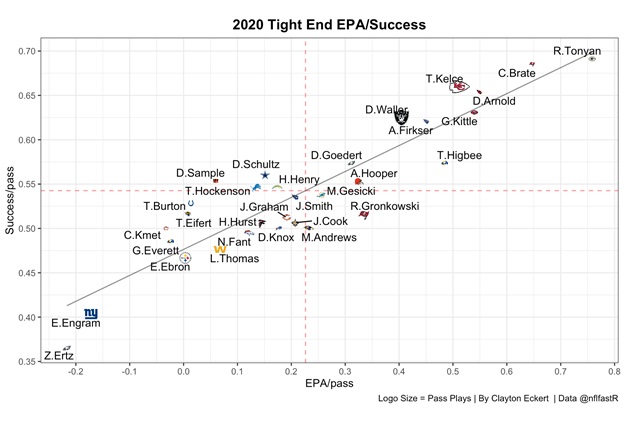 Interesting results!  This view gives us great context of team and pass game value/usage. For example, Travis Kelce and Darren Waller were in a league of their own in regard to all three datapoints along with several others on the top right that provided value without the same usage. Out of the players on the top right of the graph with smaller logos (Pass Plays), all but Cameron Brate have five accrued seasons or fewer. I know I will have my eye on those names because I like the chances many of them getting more usage with more experience or staying healthy (mainly George Kittle).

Austin Hooper is another name I think is important for the Steelers. Especially with their last matchup against the Browns fresh on their minds (2020 Wild Card Playoff Game), he tied his highest receptions game of 2020 (seven, tied with his seven catches against the Jets during the season). Fun fact, Hooper and Ebron were both targeted 11 times, with seven catches, and one touchdown in the game.

Also, I was curious to see which teams had the most usage/success with their personnel, and how many tight ends qualified per team. I know there will be some names that we don’t see here, but it’s important to remember that these are the top tight ends in pass plays. The table below is an illustration of that:

This gives us some great context of team results in the passing game, then the quality of play that player gave with the most opportunity. The teams that got the most pass usage from two tight ends, then by Success/per pass were: Bucs, Titans, Rams, Eagles, and Bears. It was also interesting to see how many teams had zero tight ends make the table. A few of those teams addressed the position this offseason, mainly the Patriots (Hunter Henry AND Jonnu Smith) along with the Seahawks getting Gerald Everett, and Dan Arnold to the Panthers.

For the Steelers, adding Freiermuth in the draft this year should allow them to have a Vance McDonald type replacement year one that could potentially become more in year two and beyond. My optimism is a little lower in regard to the 2021 tight ends than my other studies, mainly due to Ebron being more the FLEX type (more WR than blocker) and the time it might take for Freiermuth to adjust to the NFL. I am very high on his potential to be a well-rounded tight end for his career though, and it will be very interesting to see how the tight ends fare in 2021.

Let’s take a look at who did the best with the most opportunity (for Pass Play value):

The main takeaway from the table for the Steelers is connected to the takeaway that continues to reoccur through my studies: Quality over quantity. We see Ebron ranked seventh in pass plays, but lower in the quality aspects. Just like the wide receivers, we need more EPA/Success (quality) rather than throwing as often (quantity).

Taking all the above information, I will rank them for 2020 by: Pass plays for usage, Success/pass for quality, and EPA/pass for winning value:

How do you think the Steelers’ tight ends will do in 2021? Thanks for reading and let me know your thoughts in the comments!