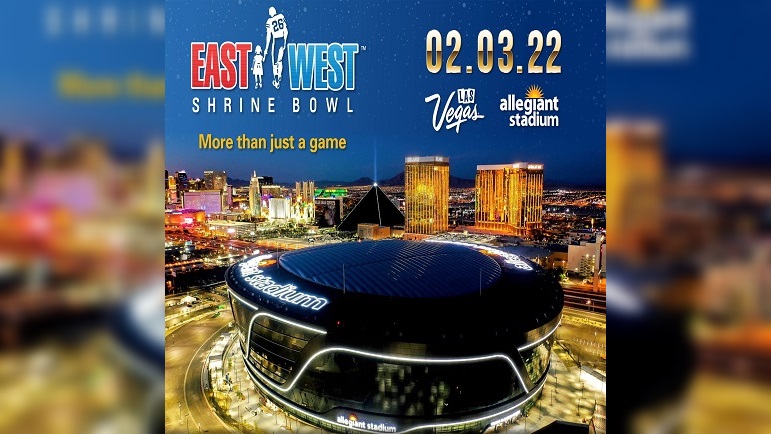 There was big news related to the NFL and the pre-draft process on Tuesday morning. It was announced that the East-West Shrine Bowl is moving from its longtime home in St. Petersburg, FL., to Las Vegas, NV.

The annual All-Star game will now be played at Allegiant Stadium, home of the Las Vegas Raiders, as part of Pro Bowl week next year on Feb. 3, and will be televised in primetime on NFL Network. The Pro Bowl will be played at the same venue three days later.

“The East-West Shrine Bowl is exemplary of the values of football, as all involved have the opportunity to inspire and encourage the children and families at Shriners Hospitals,” stated NFL Executive Vice President of Football Operations Troy Vincent in the East-West Shrine Bowl release. “In addition to community service and engagement, student athletes get an early start on the evaluation of their skills and coaches also showcase their talent, develop professionally, and network with colleagues, which is invaluable to the future of football.”

The East-West Shrine Bowl game had previously been held the week before the Reese’s Senior Bowl in Mobile, AL, but that will change now. It now appears as though the Shrine Bowl practice week will coincide with the Senior Bowl’s practice week, and that probably won’t sit well overall with NFL teams. Specifically, their front offices and scouting departments. It’s worth noting, however, that the game date of Shrine Bowl is Feb. 3, a Thursday, while the Senior Bowl will be played on Saturday, Feb. 5.

Steelers Depot hopes to have at least two members of our staff at both the East-West Shrine Bowl and the Senior Bowl. I live in Las Vegas and am originally from the immediate Mobile area so it will make it much easier for me to coordinate getting members of our staff to each event to provide first-hand coverage of the pre-draft All-Star games.

The East-West Shrine Bowl is the longest-running college all-star football game in the nation. Since 1925, the game has benefited Shriners Hospitals for Children. More than 300 Shrine Bowl alumni are on active NFL rosters each year. To date, East-West Shrine Bowl alumni represent 78 members of the Pro Football Hall of Fame and more than 200 members of the College Football Hall of Fame. To learn more, please visit shrinebowl.com.